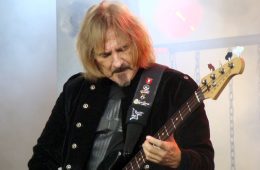 GEEZER BUTLER Explains The Story Behind His Bar Brawl Arrest

Manos SpanosMay 21, 2014
BLACK SABBATH bassist Geezer Butler recently spoke to Time Out Dubai about the possibility of the band releasing another studio album to follow last year's reunion CD, "13". "We've still got four tracks left over from ['13'], so maybe we'll fill in the other four or five tracks and put out another album. If it's right. We wouldn't do it just for the sake of it, or the money or whatever. But yeah, maybe." Butler also talked about SABBATH guitarist Tony Iommi, who was diagnosed with cancer in 2012. "Tony is probably healthier than everybody else now, after all the stuff they've done to him," he said. "He's really done well, he's definitely in remission now." Regarding founding BLACK SABBATH drummer Bill Ward, who was originally announced as part of the band's reunion album and tour in late 2011, but bowed out in early 2012 over a contract dispute, Butler said: "We started off with Bill Ward this time around and it just didn't happen… To be blatantly honest, he just couldn't do it anymore. He was thinking that we could take, like, ten years to do the album, whereas we knew we only had so long to do it and get out on tour, while you're still good at what you do. Bill was a bit unfit, and ironically in hospital with intestinal problems, so he'd have had to leave the tour anyway if we'd gone out with him." He added: "I love Bill — we all love Bill. It's a horrible thing he couldn't complete [the album]. SABBATH is SABBATH, it's the four of us. We were almost going to call the album '75 Percent' at one time [laughs], because that's what it felt like. Especially when [RAGE AGAINST THE MACHINE's] Brad Wilk came in drumming — that was [producer] Rick Rubin's idea to bring him in, and we thought if we're bringing a brand new drummer, why can't we have Bill? But Rick Rubin said, 'We can't be in the studio forever waiting for Bill to get it right.'" Butler was also full of praise for producer Rick Rubin, calling their working relationship "incredible — it's just like having a fifth member." He added: "Tony came out with tons and tons of riffs, we picked out what we liked, about 40 riffs that Tony had that we thought were worth doing. And then Rick came in and narrowed that down to 14 songs, and it's just like having someone who sees you from the outside after all these years. He didn't want us to come out with a typical heavy metal album. He said ‘when you started there was no such thing as heavy metal, so forget what's come after you, and go back to what you were before that, before METALLICA and all those bands, and just do what you did back then, that experience, play live in the studio as if you were onstage in a little club,' and that's what we did." BLACK SABBATH is scheduled to end the touring cycle for "13" with a massive July 4 gig at London's Hyde Park, and according to Iommi, it could be the last time SABBATH ever plays live. Iommi told Metal Hammer, "It could be the last ever SABBATH show. I don't want it to be, but there's nothing really planned touring-wise after that show, so for all we know that could be it, really." Iommi admitted that even if SABBATH does tour again, he does not want to travel as extensively as the legendary group did in the past year. He explained, "To be honest, I don't want to be touring to this extent too much longer, because it makes me feel so bad." Iommi had to return home for treatments every six weeks during most of the "13" tour, but said that it's now a matter of waiting to see whether the disease comes out of remission. He revealed, "I'm at a stage now where I have no support, which means I have to see whether the cancer is coming back or if it's still there or what. I just don't know. It's a bit of a worry. After we finish this tour, I'll go in and have scan, so we'll see what that shows up." "13", the first SABBATH album to feature Butler, Iommi and singer Ozzy Osbourne in 35 years, debuted at No. 1 on the U.S. and U.K. album charts last year. The band has not hinted if it will make another studio album, and Ozzy told The Pulse Of Radio last year that he was fine with the possibility of "13" being its last one. "For whatever reason, if we don't do another studio album, this is where I would have liked to have been at the end of SABBATH, my days with SABBATH," he said. "But life has a funny way of twisting things around, and if we do do anothe
05 min read

Manos SpanosApril 2, 2014
BLACK SABBATH bassist Geezer Butler spoke to Bryan Reesman of Grammy.com about the writing process for the song "God Is Dead?", which won a Grammy in the "Best Hard Rock/Metal Performance" category in the pre-telecast ceremony at the 56th annual Grammy Awards on January 26 at the Staples Center in Los Angeles. "God Is Dead?" also picked up a nomination in the "Best Rock Song" category. In addition, SABBATH's comeback CD, "13", earned a nod for "Best Rock Album". "Tony [Iommi, guitar] came up with most of the music [for '13'], and then we all worked together to arrange it," Geezer said. "Ozzy [Osbourne, vocals] always jams along to us, and he came up with the title 'God Is Dead?' He remembered the [1966] Time magazine [cover story titled] 'Is God Dead?' — but he remembered it as 'God Is Dead.' I had a mini-argument with him about it. I looked it up online and showed him that it was 'Is God Dead?' Then I read the Nietzsche philosophy about it. [Editor's note: "God is dead" is a widely quoted statement by German philosopher Friedrich Nietzsche.] "I wrote it about a person who thought it was completely revolting to think that somebody would say that, and it sticks in his head and he keeps hearing it in his mind. So he turns violent in the end and sets out to murder everybody. It was also inspired by the shootings that were going on at the time in the States. People were saying that 'God told them to do it,' and stuff like that. That was one of the first songs we started writing together, so that probably took the longest to [finish]. There was a lot of work before we got to the studio, and we knew that was a good song. The lyrics were written the night before recording them. The only lyrics that I had written [prior to recording] were 'Dear Father' like a year before we went into the studio, and that was because of all the priests being exposed, no pun intended, on the news." Osbourne told Shortlist that although he came up with the title for "God Is Dead?", Butler wanted to call it something else. Ozzy said, "I was in a doctor's office and there was a magazine in there with that line on the cover. I thought, 'Yeah — people flew planes into the World Trade Center because of God, there's all this fucking shit going on in the world in the name of God.'" Geezer added, "Ozzy gave me that line, and I wrote the lyrics. I wanted to call the song 'American Jihad'." Ozzy continued, "Fuck that. I'm the guy at the front singing it; I would have had a fucking army after me . . . In the early days [of BLACK SABBATH], there was a lot of backlash from religious groups . . . I was sent letters written in blood. In my house I must have 25 fucking Bibles, each with a marked-up passage that [the sender] wanted me to read." "13" debuted at No. 1 on the Billboard album chart in June 2013, the first SABBATH album to ever top the U.S. chart. The disc features Ozzy, Butler and Iommi playing together for the first time in 35 years. Their last effort together was 1978's "Never Say Die!"
03 min read

Manos SpanosMarch 27, 2014
Bryan Reesman of Attention Deficit Delirium recently conducted an interview with legendary BLACK SABBATH bassist Geezer Butler. A few excerpts from the chat follow below. On being raised vegetarian: Geezer: "I was brought up vegetarian. Me mum didn't eat meat, and a lot of it was because we had such a big family. We had seven kids in the family, and me dad used to get about $30 a week to feed us on, so there was never that much meat around anyway. So I didn't really miss it. Then the older I got, when we started doing up riders for the road, as soon as you would say you were vegetarian, people always would think you had fish for some reason. I said, How is fish a vegetable? I always had these arguments with them and I always had eggs and everything. I just decided to do vegan stuff, nothing to do with any animals or anything. I just went full vegan from there.” On being raised with religion: Geezer: "At first, we took Holy Communion and that was about it. I like kids having a belief up to a certain age, then let them go their own way and make their own mind up. I think it was good for me to have been brought believing in with something, and I did get into it and believed in it up to a certain point... As soon as you start meeting girls elsewhere, you sort of go off. That's what I was doing in the end. I was going to Mass every Sunday just to take a look at all the nice girls that were going there." On rebellion: Geezer: "It's almost like people are afraid to protest anymore. I've noticed that especially in America. If you go out to protest anything, you're surrounded by police who aren't afraid to use teargas or rubber bullets or even real bullets." On remaining humble: Geezer: "Know who you are and stay who you are. Always remember your roots. People I know and people that work for us have worked for other people…[certain older people] act like they've invented the cure for cancer, the way they treat the people that work for them. It's unbelievable the egos that some people get. I just don't get it." Read the entire interview at Attention Deficit Delirium.
02 min read 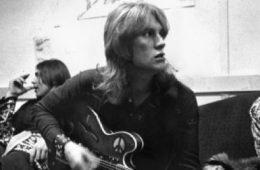 Manos SpanosMarch 7, 2013
A number of rock and heavy metal musicians have reacted to the news of the death of legendary British guitarist and singer Alvin Lee, founder of the band TEN YE...
03 min read