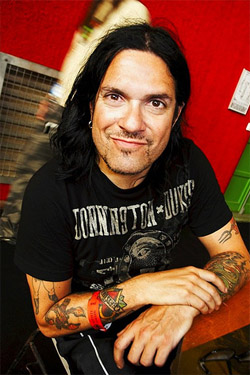 On the occasion of the new Prong release and the split of Ministry, Metalpaths had the chance to speak with Tommy Victor.

Hello Tommy this is Rena from Metalpaths, how are you?

Fine, thank you. How it’s going on?

Fine, we were expecting you to call us. So there has been two years since Prong’s latest release “Power Of The Damager”. Are you finally satisfied with the result of the album or is there something that you would like to change if you could go back in time?

I would like to change a couple of things like the actual production; I would have done it a bit more carefully. The songs could be better mixed to carry the weight of everything. Looking back I would produce a little bit more the guitar parts and the drum sound. However I think it came out good, we are very happy about it. I just would like more people to be exposed to it, to hear it a bit more, that’s one bad issue.

So this is the reason you decided to release the “Power Of The Damn Mixxer”, right? What is the connection to these albums?

Yeah maybe that’s because the people wanted it to be an original one a little bit more.

But I guess this is not the only thing that made you create this album. Would you like to tell us a few things about your decision?

Yes it’s not, we had plans to do it a long time ago and it was one of the things that the contract with 13th planet records was telling us to work for, the label wanted us to release this album and I definitely wanted to do this so finally we just wanted to find the right people to do it and to figure it out, so it’s a combination of all these things. We really did a good job so we decided to do the Mixxer record cause I like what I heard, I was excited about it. Originally we had some other people to do the mixture but I didn’t like them but this combination was much better, we started getting some better mixtures.

Speaking about the label, how is your relationship with 13th Planet records these two years so far?

It’s all pretty good, it’s not the typical kind of relationship with a label and I think it’s getting better and better, we are pretty happy with them right now. 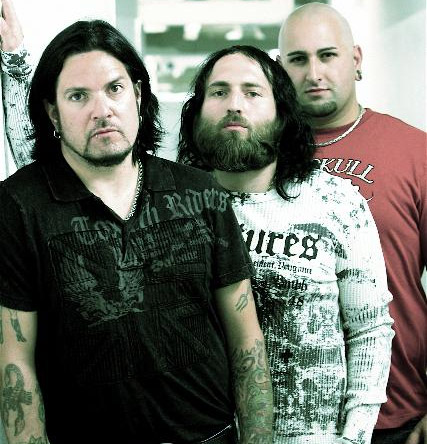 Are you planning to shoot any video clip of “The Damn Mixxer” as you did with the self-titled song of “The Damager”?

We were thinking about it but I don’t know if it’s actually a good idea to film a video right now. It could be something happening but I don’t even know how much a video costs these days.

Have you already booked any live shows with Prong?

Yes the European tour is planned to start in May.

Are we going to be luckier with Prong than we were in Ministry? I mean do you have any plans to visit our country this time?

Unfortunately I don’t think Greece it’s a part of our schedule, maybe on the new record but not yet.

Let’s move a little bit to the Ministry facts. What was the reason you split the band? Was it something that you were thinking about for a long time?

We didn’t want to do it anymore, it was everyone’s decision. Especially now with Obama there was nothing to complain about. I just got tired and wanted to try other things like producing the next Prong record and do other stuff in general rather than be focused on Ministry all the time.

Too bad cause I really liked your last album. By the way how did you decide to cover the song “Roadhouse Blues” from The Doors?

Oh everyone were listening it on the radio and while we were driving to town we thought that it would be a good idea to cover this song, that’s how it started and since I wanted to do a cover on the record we decided to include this one.

So this was not because you were a fan of The Doors.

Actually I am. Ok I don’t listen to them all the time but I do like The Doors!

So you recently released the last one Ministry album, a live cd titled “Adios…Puta Madres”. Why did you name it like that?

Everything is finished and we wanted to say goodbye to everyone so we thought of something simple like “Goodbye assholes”!

Is this the last “Adios” or we can hope to a future re-union?

I think that no, that’s it!

You are going to release a DVD version of “Adios” as well. When will it be out and what exactly it is going to include?

I think that’s coming out in May but I m not pretty sure what the footage of the dvd is. I think it will be out in May 12 and that the Ministry cd is going to be released after that.

Tell us a few things about the recent last big Ministry’s live tour. How did the crowd reply to your last good bye?

A lot of people were complaining about the set list but I thought that it was the best set we could do, we really wanted to represent the last two records, it was really important for us. The people of course always want to hear the old stuff you know but the stage reaction was just fantastic, the fans were having a great time and it was really good. 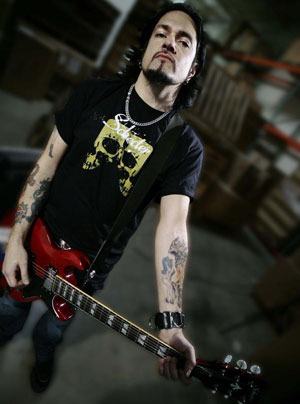 You are into metal for more than 20 years. What differences can you see between the scene back then and nowadays? Are you fan of any of the new bands that are being formed nowadays?

It’s so difficult to keep up with these all, I mean I hear stuff and say ok this is cool, I like many bands out there but it’s difficult for me to keep up with them all. A few years ago there were only a few fanzines, bands were playing much better and it was just easier. It’s very difficult nowadays cause everything has to do with the internet and I cannot think of myself standing the whole day in front of the computer about music. A few years ago I was running to a club to see a band live and I preferred that way than being stuck on the internet.

So you think that downloading has injured the music right?

Downloading? It’s horrible! You do a record and everyone can download it.

I don’t anymore. Nothing at all.

You have worked in the past with many legendary artists such as Rob Zombie, Marilyn Manson, Glenn Danzig and many more, you have also made big success with your personal band Prong, been an active member of Ministry and you are still of Danzig. Do you feel “complete” with your career so far? What are your expectations for the future in personal?

No I don’t! (laughs) You know people keep saying I should but I haven’t finished yet so I do not feel complete, it’s still going on so when It’s finally done then I can evaluate myself. I think I have made a lot of mistakes in my career and I would have act differently right now. I try to be happy about what I have done so far but it’s still not over so we’ll see what happens.

Actually I am glad to hear that because we may hope for a new project or something. Do you have something new in mind?

Yeah maybe…At the moment apart from the new Prong album and working on the next Danzig record which is coming out in September 2, not yet. These are the two things I am dealing with right now but who knows about the future, I may start a new project or do anything else but right now these two things are taking enough of my time so I don’t have many other things in mind. It’s just Prong and then Danzig.

Before we close, do you have anything to tell to your worldwide fans?

Don’t forget to check out Prong at www.prongmusic.com or the myspace at www.myspace.com/prong. I’ll see you everybody in Europe this year!

Thank you very much for your time Tommy, see you on the tour.

Thanks a lot, hope you have a great day!