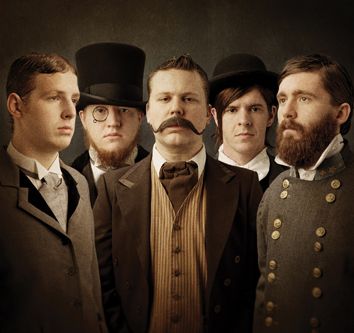 On the occasion of The Chariot’s new record titled “Wars And Rumors of Wars”, Metalpaths had the chance to speak with… one of the biggest figures of the so-called “chaotic hardcore”, Josh Scogin, a man who I consider both a great musician and an inspiring poet as well.

You have recently released you third full length album titled “Wars And Rumors Of Wars”. I know it is a bit early to jump to any conclusions but what is the feedback you’re receiving from the fans until now and what are your future expectations from this album?

People seem to really be enjoying the record. I have heard many times that this is the best “The Chariot” record to date. I agree, and that is very exciting to hear.

“You will be hearing of wars and rumors of wars […]”, Matthew 24:6. What makes this extract so special for you that you decided to name the album like that? Do you think that this is the time that the wise men were speaking about? And what about the continuation that says: “That is not the end yet”?

The title of our CD does come from that verse but what I am actually referring to when I talk about “WARS” is the battles that go on inside our heads.

Tell us a few things about the shooting process of the “Daggers” video and the choice of the concept as well.

That video rules……I told the lyrics to the company that shot the video and they just came up with that sick concept. We just shot in front of a green screen and they did the rest. That is by far my favorite video.

Even though I am one of those people who hate it when music is being labeled, I really find some difficulties when I am asked to describe what music do “The Chariot” play. How would you make someone that has never heard of you before understand what this is all about?

I usually just tell them that it is a fun time and they have to see it live to really understand what is going on. As far as labeling and style and all that, I never know what to say. So just check it out live and it will all make sense.

Christianity is one of the things that strongly characterize “The Chariot”, but your music still belongs to the metal genre which has been always receiving negative remarks –even strong attacks- from Christian zealots. Have you ever had to deal with a narrow-minded disciple who was claiming that your music is a blasphemy?

Yeah, I mean those people come and go. I ain’t really worried about those people or anything because they don’t understand what we are doing. 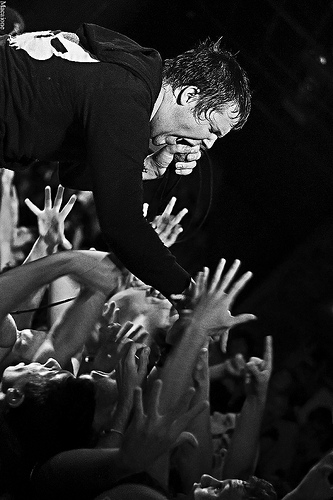 Where does your dedication to Christianity derive from? What is your opinion about the other religions?

Well that is far too long of an answer to be able to write down in this interview but the short answer is that I am not too well versed in other religions, which is why I am always respectable to everyone regardless of their beliefs. All I can say for my beliefs is that it is not built around anything but experience and although I don’t have an answer for everything, there are too many things that have happened in my own life that I just can’t deny.

It is a big pleasure for your fans, not only to listen to your music but to read your lyrics as well and this witness that beyond Josh Scogin lays an artistic spirit. Would you consider yourself as a poet?

For sure, I usually refer to my “lyrics” as poems. Because that is what they are.

Tell us a few things about the 2 following phrases: “Creating Something Out Of Nothing”…

Well this is simply “ART”……when you create something out of nothing you have just made art.

And… “A song is never completed, it is only abandoned.”

This is so true…as an artist you can forever be changing a song or making a song “better” or whatever but the moment that you stop recording and send it off to be mastered you have not “finished” the song…you have only abandoned the song and that is how it will stay forever.

Apart from “The Chariot” you have a project which is called “A Rose By Any Other Name” where you are composing more acoustic songs with soft melodies. I remember reading that your wife & family is your basic inspiration of this result. How did you decide to form something like that? Could that be considered as a way to discover a few things further about Josh Scogin’s real profile?

During the last years “The Chariot” is increasingly attracting more fans’ attention, which lefts 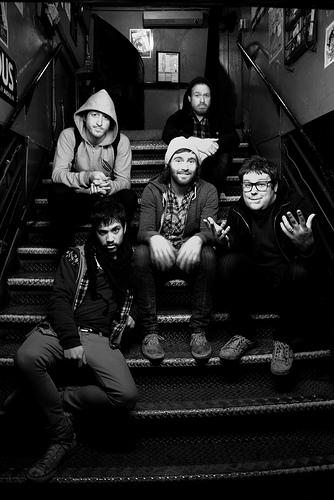 us no doubt about your venerable work, however “Norma Jean’s” upward tendency makes me wonder about the reason you decided to part your ways. Were there any “in-house” arguments that pushed you to this direction?

Not at all. My leaving them was completely a peaceful event. It was all something personal for me and had nothing really to do with the band at all.

According to your live guest appearances to their shows, you still have a good relationship with the members, aren’t you?

For sure. We all hang out a good bit when we are all not on the road, as well as I have flown in to do a Mexican tour with them once when Corey had gotten sick on tour and that was a good time. We are all still bro’s.

And what about your co-operation with some other big names such as Aaron Weiss of “MewithoutYou” or Hayley Williams of “Paramore”? Were you friends with these guys or you just met in a professional way?

Aaron, I have known for nearly 7 or 8 years or so. We used to tour back in Norma Jean and love that dude a lot. Hayley, I met when she was like 15 or something and she was just hanging out and liked our band. I saw her a couple of times and got to know her and really like their band and next thing you know they blew up so huge and they are just sitting on top of the world right now. And I can’t be more happier for them. They are all such great musicians.

Going back a couple of years before, when we had the chance to see you perform for the first time in our country, you were supported by a local band named “The Voldera Cult” who made a cover to Norma Jean’s “Memphis Will Be Laid To Waste”. I remember the band covering this song from previous shows, so I guess that they were pretty honored when you got on that stage and participated to their performance. But being the original singer of this song, how did you feel when you’ve heard that these guys were covering “Memphis…”?

Honestly I was completely shocked. I mean we are worlds apart and yet they are covering a song that I helped write and everything, I was really flattered.

Do you prefer playing overseas or to venues close to you? Which was your worst moment on tour and why?

I enjoy them all. I love traveling so if it is across the ocean that is fine as well as if it is 15 min from where I live. I enjoy it all.

Which were the bands that influenced you at the beginning of your career?

I really was influenced more from bands that had intense live shows and where known for their showmanship. James Brown, Frank Sinatra, Jerry Lee Lewis, of course Elvis Presley…..etc.

And what about your favorite new-born artists?

I am really into some of The Killers songs, I like Arcade Fire, and I am sure there are others, but my mind is blank right now.

Any promise for your next visit to our country?

We hope to be back sometime early in 2010, if not sooner.

Thanks a lot for your time; I hope we’ll see you again very soon!