“Design Your Universe” is the new album of Dutch Epica and the really friendly frontwoman of the band Simone Simmons talks with Metalpaths. The beautiful vocalist talks about the composing part and the lyrics of the album, the new members that joined the band, the cooperation with Tony Kakko and lots of other interesting things around the band.

Hello Simone this is Panagiotis of Metalpaths. Where do we find you at the moment?

At the moment I am home.

So the new Epica album is ready. How do you feel about that?

It’s a long period which is finally coming to a climax that we worked so long for the new record, we were working a new song, we played a show in Amsterdam that we presented our new record there and there was really a great feeling to finally play the new songs live that we were listening to for so long and yeah now they really come alive. 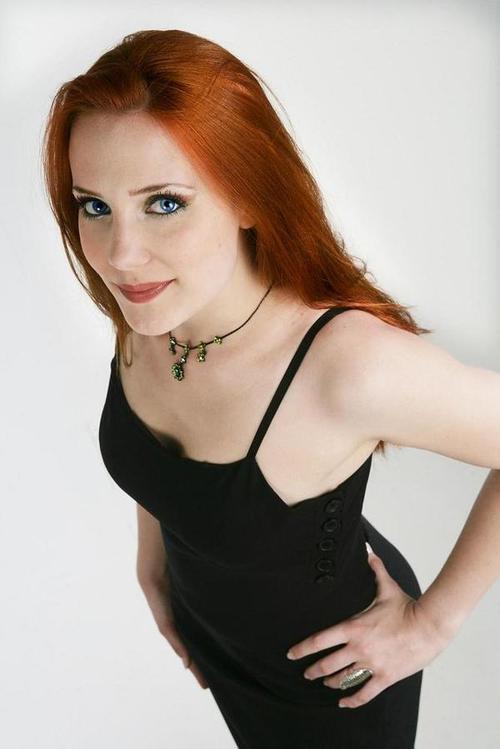 How was the reaction of the fans to the new songs?

Really cool. Unfortunately there were already some songs available for download on the internet, somebody put it online. But we have the video “Unleashed” and Nuclear Blast also put our very first track of the album on line. So some fans already knew some songs and it was really funny that they were singing the lyrics of some of them live with us. For now we got really positive reactions, we try to make the show really beautiful, lots of lighting, technicians, guest musicians and Ad Sluijter also came on stage in our release party in Amsterdam playing the last song “Consign to Oblivion” and it was a nice surprise to the fans. They really liked it.

You chose “Unleashed” to make a video clip. Do you think that this song is the hit of the album ?

Well, the album is quite complex, a lot of long songs, it needs a couple of times listening to before you can really get the album. “Unleashed” is one of the few songs that really stuck to your mind after listening to only one time. So it’s powerful, catchy and it was a perfect candidate for the video.

What were the composing and the recording process of the song like? Did you have any problems during the creating of the record ?

Not really big problems, but the whole process took very long and at the end of the writing process Isaac joined the band and at the last moment he had to re-write the guitar parts, guitar solos and it was a little bit pressure for him, cause we had made the preproduction of the album and wanted to enter the studio in March. So he had to work really hard in a short time to finish the parts for the album. It was like any other recording only that it took very long.

Who composed the songs ?

The majority of the songs were composed by Mark, but both Coen and Yves have also written some songs. Coen has written “Burn To A Cider” and “Tides of Time”. “Deconstruct” was written by Yves.

How would you describe “Design Your Universe” to the fans ?

I would say that it does really sound like Epica, but ten times better and more intense. Every element we have in our music is amplified. There are bigger orchestrations, the songs are longer and more complex, the drums are heavier and the vocals are more diverse. So more quiet or old elements which we had in our music are bigger and better. 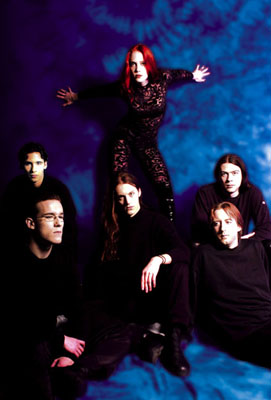 In my opinion this record looks more extreme than your previous albums. Was it something that naturally breathed out from the band or you tried to experiment with your music?

We always liked to do new stuff. Mark had a side project, black/death metal, so he used some parts of that project and put it in the Epica music. He reserved this stuff for his side project but then he thought he could use it for Epica and having Arien as our drummer, that is no problem for him of course, he can really do stuff like that, so it was an experiment.

There are two new members in the band. Can you tell us a few words about that? How is it going with them?

Very good, they’re both very sweet and they behave very well (laughs). Arien we know him a bit longer, he’s been on tour with us many times. Isaac is now going to have his first Epica tour next week, we’re going to tout in a tour bus, we have played some festivals with him and seen his presentation on the tryouts. Both of them are very relaxed people, very happy always, very much into doing shows and very enthusiastic. It’s nice to have them around. They really bring back the balance in the band.

Do you think that the new members influenced the band to add some more death metal elements in the album?

Not per say, but in the end Arien just write a little bit on our song “Our Destiny”, Isaac has also put some guitar parts, but still the bass comes from Mark and it’s reassuring to know that the band can play it and it’s not going to slowly transform into black metal now that we have two members of God Dethroned (laughs). I don’t think so. 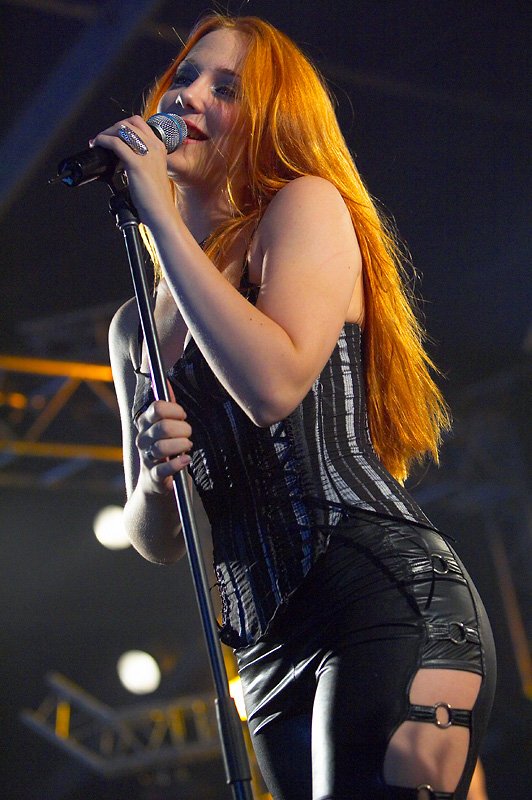 Do you think that the fans will like the more extreme side of Epica ?

I think that some fans which might thought that Epica is a little bit too soft for them and they don’t have enough metal in it, will like Epica more now, because we definitely reformed the metal elements in our music. Epica is a real metal band. We have to wait and see if real Epica fans think it is too hard for them. Time will tell, but so far they’re all very positive about it.

What are the lyrics talking about in this album? Is there a concept ?

No, it’s not a concept album. Both me and Mark wrote half of the lyrics, we both have different topics. My lyrics are like more personal. “Burn To A Cinder” is about the movie “Interview With A Vampire”, “Tides Of Time” about the circle of  life, “White Waters” is the song which Tony Kakko is singing and it’s a love story, “Deconstruct” is about the struggle we have in our lifes between materialism and immaterialism, “Unleashed” is our video and the lyrics are a bit different than what we made on the video, of course they had to make it more interesting, but the song is about having an old guy who’s thinking back and the choices he’s made, he’s disappointed in himself and he doesn’t really want to live anymore, he’s looking to be free again and live another life. Mark’s lyrics on “Resign To Surrender” is about greed, addiction, how the government is using fear as a tool to restrict our freedom, “Martyr Of The Free World” is about freedom of speech, “Desing Your Universe” is about creating your own universe with your consciousness, to live your dreams, explore your talents and to make something out of your life, “Kingdom of Heaven” is about new death experiences, and scientists who are investing new death experiences and are confronted with a lot of criticism because it’s a kind of taboo. So, there are a lot of feelings.

Which is your favorite song of the album and why?

At the moment I really like “Unleashed”, but “Martyr Of The Free Word” is one of my favorite songs and it’s also really cool to play it live.

There is also a cooperation with Tony Kakko in the song “White Waters”. How this cooperation came out?

We were on tour together on 2007, we were in support of Sonata, we became friends and when you see each other every day on tour and keep on talking, I really had a connection with Tony, and Mark asked him if he would be interested in working with Epica. He said yes, so while we were writing the songs and came up with “White Waters”, we thought it would be a cool song for him, so we sent him the song, the lyrics, what they are about and he liked it. But he didn’t have time to come to Germany to the studio so he recorded it in Finland.

Are you satisfied with the production of the album ?

Yes very much. We actually had one master of the album, but we thought it wasn’t good enough, so we had it remastered and little changes had to be made. You have to be proud of something you’ve worked for so long and finally everyone is happy and satisfied with the result. 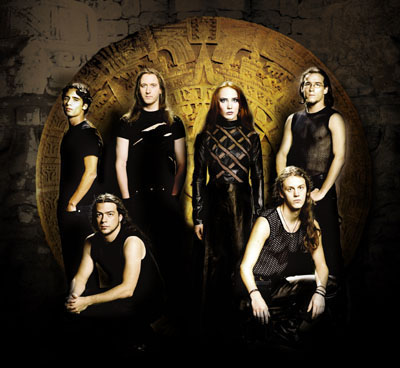 So what are your upcoming plans ? Have you already booked a tour or something ?

Yes, we are touring in Europe, next week (ps: we made the interview on October 10th) we go on tour together with two Finish bands Amberian Dawn and Sons Of Seasons, we’re gonna go in December to South America and in February we’ll go to North America and in between there will a club tour in Holland and some other shows.

Are you going to come back in Greece again? Many fans would like to know about that.

I hope so. I can’t tell you for sure, I have to check with Mark at first because he is the guy in the band who has that contact with our booker but I hope so. There’s definitely the will to come back to Greece, cause we really like Greece, but I think it will probably be next year.

Anything else that we should know or you would like to add?

I just want to say “eyxaristw”(thanks in English) to all the Greek fans (laughs). I know a couple of Greek words cause I’ve been on holiday with Mark six years ago in Athens and some other cities as well, I really loved it. I think the Greek people are very cordial and they always invite you to their home, always have food, the weather is great and I really had a great time there. Your country is very beautiful. I would really like to come back again.

Thanks for your time.

You’re welcome. Thank you too.