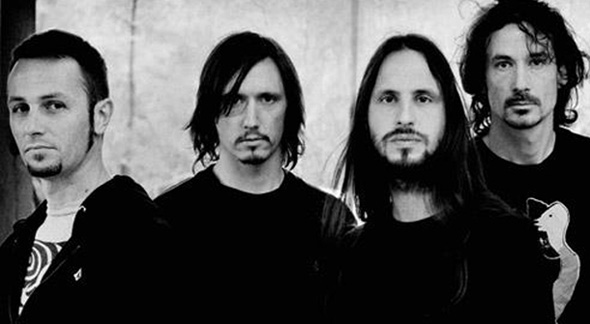 Gojira hit once again with another killer album that is called “L’enfant Sauvage”. The drummer of the band Mario Duplantier talks at Metalpaths.com about the writing process of the album, how has been touring with Metallica, his wild childhood, the “Sea Shephred” EP and future plans.

Hello Mario and congratulation for the new album. I can say that’s the best album I have listened for this year so far.

Thank you very much, I really appreciate it!

It’s been 4 years since the release of “The Way Of All Flesh”. How has been the last 4 years for Gojira?

We spent a lot of time touring everywhere in the world and make new fans because since the beginning, we were not in the shadow, but we were just a French band and we were just playing in France again and again and we had the opportunity to become famous in the rest of the world. It took us a long time to play everywhere, we did a lot of tour and when we wanted to start a new composition we had this opportunity to tour with Metallica in the U.S and Europe so we couldn’t refuse. It was such a big honor doing this tour and after that when we wanted to start the composition of the new album we had to build a new setup around the band we had to find a new label, we had to find a new manager so it took us a long time to set up everything the last four years.

How has been touring with Metallica? Do you have any special story to share with us?

It’s been wonderful because Metallica contacted the band. You know, they really liked our previous album “The Way Of All Flesh” and they invited us. We received a call one day like “hey guys, do you want to tour with us?” you know, there haven’t been a deal between a management or a deal between a label or stuff like that. It was just something by heart, they really enjoyed the band and they had to vote us, they were very kind with us, they were very close to us, they were very respectful, very closed to us. We did 35 shows with Metallica since 2009. So yes, they were really supporting the band, we had fun and we love these guys, they are very down to earth people. It’s been amazing.

Moving on your new album “L’enfant Sauvage” …is my accent correct? (laughs) 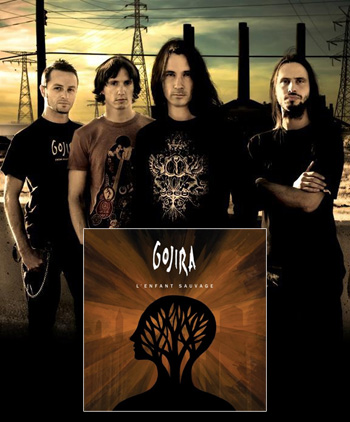 Nice! (Laughs). So Mario, how would you describe the new album to a fan that has not listened to it yet?

This album is more atmospheric than the previous one for example and it’s a good way to introduce you to Gojira if you have not listened to our music before. There are some violent parts, some extreme parts, it is atmospheric, it is progressive the same time…it’s a very emotional and very atmospheric record overall. I love this album because there is maybe less double-bass parts, it’s less technical but you have to listen to this album as a whole thing for its atmosphere. It’s maybe the most mature album we have ever done.

Are you happy with the result and the feedback?

Yeah, we are very happy! We loved the production, we are happy with the reaction of people. It’s always hard when you release an album, you never know what is going to happen and sometimes we were surprised. We had a lot of different reaction but most of the reaction was very positive and people were also afraid because we signed to the Roadrunner Records and they thought maybe that our music lost the stronger aspect…I don’t know. It’s finally very honest record and I think this album is exactly what we wanted to create without any compromise.

It’s the first release with your new label Roadrunner. Did this stress you more?

No, because we knew exactly what we were doing. We’re not like a baby-band that signs with a big label. We knew that we won’t loose anything, we knew that this platform is big for us and we’re just exactly the same band having now a really big support, a big platform. Everyone in Roadrunner is really nice because they respect us a lot, they didn’t try to change anything, they just wanted us to stay exactly the same. Now we have a big platform, we can do interviews all over the world, it’s a very comfortable feeling you know. We felt stressed but when you release an album you’re always stressed a little bit but it doesn’t have to do with Roadrunner. We’re very happy with our new label.

I think it’s been the first album you recorded outside France, isn’t it?

On the previous album we recorded the drums in Los Angeles and all the rest in France and we mixed it in Los Angeles too, talking about “The Way Of All Flesh”. On this one (i.e “L’Enfant Sauvage”), we recorded everything in U.S. So yes, it’s our first album outside France.

What made you choose New York than France ?

You know, Joe (i.e Duplantier) and I we are brothers and our mother is American. We feel very close to U.S mentality because we have our roots there. Also, Joe loves this city, New York, and he said “hey, what do you think about recording the new album over there?”. He also had a lot of contacts in the U.S, our management is from U.S, we have a lot of fans, have family over there so for us it was logical to go to the U.S.

The translation of the title of the album is “Wild Child”. What inspired you to name the album like that? Have you been wild during your childhood?

Yeah we were very wild! (laughs). You know, we grew up in a big old house in the forest: you know very cold and traditional and we were little wild children. We were always on the trees and we kept something like this inside of us and it’s the same for the two other guys of the band Jean-Michel and Christian Andreu they are all very wild. There is something very strong and very true with this title because we feel like wild children. We all thinking about how can we stay wild and free in this world. It’s just a reflection about everything actually.

Tell me a few things about the writing process of the album. What’s the process for a Gojira album to be created? 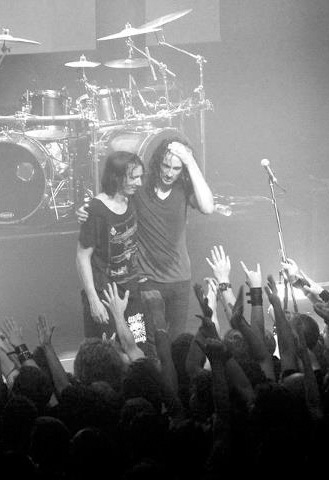 It depends, each album is very different. With this one, we just started jamming in the rehearsal room and most of the ideas came from Joe and me, then we went all together into practice room. We are very comfortable with compositions. Joe and I, we have this emotion of a brother, the blood between him and me, we feel very close together and it’s very natural for us to compose music, to find ideas and we don’t need to talk, we just play and ideas come like this. So on that album most of the music is written by Joe and me and after that, when we compose the music, Joe writes all the lyrics usually.

Is it another environmental album lyrically? What are the lyrics talking about?

It’s always the same meaning. On each album we talk about human conditions in general but with different background. For example “From Mars To Serious” you have this match planets between Mars and Serious and it’s the trouble between two planets. On “The Way Of All Flesh” it was about death but in fact it was about inside feelings. On that album it didn’t change Joe talks about his own identity, his own wild child, his feelings he talks about himself.

I recently read an interview where Joe said that a musician has freedom as an artist but should be responsible as well. What are the responsibilities you have as a musician and how does it reflect on your new album?

I don’t know because I’m not Joe. You know, I don’t know why Joe said that (laughs). I would say that we have an image, a responsibility: when you hear an album we want to put there our image you know. We want to be honest and to express ourselves so people who hear it will be close to themselves aswell.

You were about to release a non-profit EP with a lot of guest appearances. What happened with that?

We have been recording our new album so we didn’t had time to finish this but our aim is to finish it before the end of the year. It took us a long time because you know when it’s a non-profit EP people sometimes work for free, and when you don’t pay people it generally takes more time. Also we had some technical problems and we’ve been working on our dvd and our new album so it took time. We have to find a way to sell it on the internet.

So Joe, what are your future plans?

We have a tour in the U.S. which starts in about a week with Lamb Of God but there is a problem with Randy Blythe’s situation he is in jail at the moment, have you heard about it?

Yes of course. So what are you going to do?

So we are waiting for the decision from the jury, after that we go back to Europe in November, for the European tour and we also have a boat cruise, this Mayhem Festival Cruise, in December and we go back to the U.S. in January for another festivals. So, we have a lot of touring for the rest of the year.

Any chance to come back to Greece?

Yeah, maybe. We hope to play in Greece because we love this country. I don’t know exactly the perfect planning but we are working on it.

Ok Mario, thank you about this interview, it’s been a pleasure.

Thank you very much too! Have a nice day.