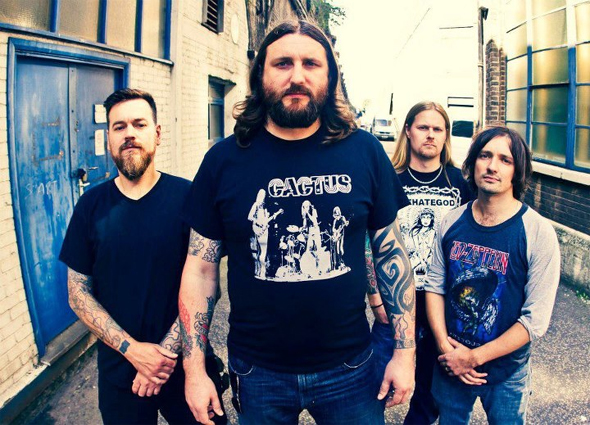 Just a few days before the upcoming shows of Orange Goblin in Greece Metalpaths contacted the frontman of the band Ben Ward who talks about the latest release “A Eulogy For The Damned”, the future plans while regarding the shows in Greece he feels excited of playing the new material.

It’s been seven months since you released your seventh album “A Eulogy For The Damned”. Is it something like a lucky seven for you so far? Which are the responses of fans and press and how do you find it as an album now that you live with it through the touring?

The response to the new album has been great from both the fans and the critics. It’s gone better than we’d imagined. Obviously there was a 5 year gap between this album and the previous one so we were concerned that maybe people may have moved on and forgotten about Orange Goblin but everything has been very good for us and we are currently enjoying our profile being higher than it’s ever been before.

The new album’s title is interesting and catchy. Is Orange Goblin the eulogy for the possible damned listeners who have been tired from all the crapy music?

The title is just a play on words really. The Damned could be the whole of mankind as we are all going to die at some point. A Eulogy is the nice things we remember about someone that has died so to put the two together sounded good and kind of made sense.

You did an amazing video for the initial track “Red Tide Rising”. Could we have some details about it  ?

Red Tide Rising was filmed the day after our Christmas show in London so we all had very bad hangovers that day! We went down to a special location in the heart of the new forest in Dorset (in the south of England), it took all day and it involved a lot of waiting around and getting cold for all of us but it was a lot of fun and the director did a great job. We also used some animation by a talented Italian artist that had done a depiction of the HP Lovecraft story ‘The Call of Cthulhu’. I think the finished product looks great. 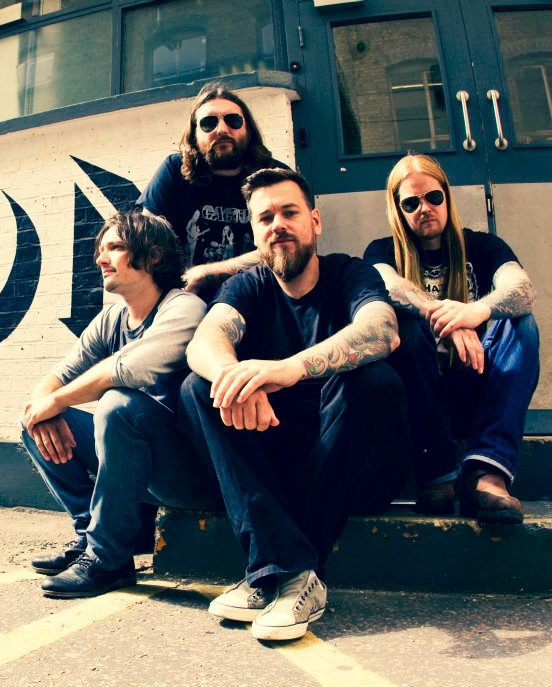 Fifteen years ago I and many people listened to a newcoming band that managed to become soon one of the best of their genre. Did you expect the success and respect you have earned so far when you were starting the band? Is it a motive for you to continue being full of quality?

The band started as a few friends that were bored and we never really expected to do any more than make a demo and play a few shows in local pubs to our friends. It has been a roller-coaster ride for the past 17 years but we have done more and achieved far more than any of us expected. It’s been fantastic as we are still massive fans of the music we create and have inspired a new generation of bands to create. We have met people that were heroes to us and found out they like our band so that is very rewarding and satisfying. The main thing for us is that we are still having fun and all the time we are doing that then we will continue doing Orange Goblin.

Which of the principles of the band have stayed the same since the beginning and in which aspects did you consider right changing your thoughts and acts through the years? Is experience a strong ally in cases where you might face an obstacle and finally avoid it because of it?

Yes, we have grown up together so we have learned how each other works and we know when to let people have a bit of time to themselves too. As I’ve said before, we all still enjoy doing this band so we see no reason to stop. In the early days it was all about being silly and drinking as much as possible and taking any opportunity to get out of your mind but as you grow up and gain popularity you get a bit more responsibility. Nowadays we go out with the intention of putting on the best possible show we can every night so we are a bit more sensible about what we drink and how we get ready to play.

Rise Above Records was the first home for the band. How was it getting signed back then? What’s your relation with Candlelight currently? Are you satisfied for the promotion of the album?

We were very lucky to be in the right place at the right time with Rise Above. We started playing shows in the London area with bands like Mourn, Electric Wizard, Solstice, Acrimony etc around 1994 / 95 and there was a burgeoning doom / stoner scene here in London at that time. One night we played in Camden with Electric Wizard and Lee Dorrian was at the show and liked what he saw and heard so offered us a deal with Rise Above. Cathedral were a massive influence on us and Lee’s a personal hero of mine so it was a no-brainer really, I think we agreed to sign with them that night! We were with Rise Above for about 10 years and they helped the band 100% in everything we did and achieved during that period. Our contract ran out after ‘Thieving From The House of God’ and we decided that we should try something different. We did one album with Sanctuary before the label folded and then found ourselves with Candlelight who have been fantastic with us. The promotion and everything has been top class so we have no complaints or regrets about anything.

There’s a story about Jason Newsted getting obsessed with your material on ”The Big Black” period and instantly ordering your back catalogue. Is this true? Did you have such admiration from other known gentlemen of the rock and metal scene through the years that made you feel good?

Yes, apparently Jason was big fan of the band and that means a lot. As I’ve previously stated we have been lucky enough to meet our heroes and find out they are fans of our band, it means a lot to get respect from people like Lee Dorrian, Wino, Dave Grohl, John Garcia, Josh Homme, Phil Anselmo, Alex Hellid, Robb Flynn, Dave Wyndorf, and all the other people that have told us that they love our records. It makes everything worthwhile!

Since you have become pioneers after all these years, do you see any new bands able to do what you did when you were starting? No matter the genre, are there any bands of your liking out there currently or do you prefer the old classic traditional stuff?

I wouldn’t say that we are pioneers, we didn’t start what we do, we are merely torch carriers that continue to try and spread the message of decent music. Bands like Sabbath, Blue Cheer and Pentagram are pioneers. These days there are a lot of great bands that continue to make killer music all over the world. What we do is good old fashioned rock & roll / classic rock and I don’t think that will ever go away. All the time there are pissed off kids in the world that want to play guitars you will always have good rock bands. There are probably too many good bands for me to mention!

I remember seeing you in Athens for the first time ten years ago in the “Coup De Grace” tour and I can’t help but remembering the great mood you had while playing. What do you remember from the first visit ever in Greece in 2002? Also, we are lucky to have three gigs in our country this time. Which are your expectations from these gigs?

I do remember that first show in Athens, we all had a great time and the response from the crowd at that show took us all by surprise, it was amazing! We have been back to Greece since and played in Athens many times now but we always feel that our time there is too short so this time we decide to make it a tour and got to some other towns and cities in Greece. We are really looking forward to it, apart from the shows and the fans we love Greece for its history, it’s food and it’s weather. This will be the first time we have played any of the new material from the new album in Greece so I can’t wait to play!

I always admired you for the fact that you never lost your heaviness when you were left with one guitarist. Martyn Millard plays like a second rhythm guitarist many times and makes fans really enthusiastic. Was it hard to adapt to this change back then or was it something that came naturally?

When Pete left the band we never really considered getting another guitarist as it just felt so natural to continue as 4 piece. This gave both Martyn and Joe more freedom to do a lot more to fill the gap left by Pete. A lot of our favourite bands and biggest influences (Sabbath, Motorhead, ZZ Top, Kyuss) only have 1 guitar so it made sense to us to just go in that direction. I look back now and think we made the right decision as the band has continued to evolve since then.

What’s the plans for the band for the rest of 2012 and the beginning of 2013? I hope it won’t take you five more years for the next album…

We have the 3 shows in Greece at the start of October. Then we have a tribute show in Leeds for Jay-Jay Winter, the singer/bass player in a band called Asomvel that died a couple fo years ago. After that we have 3 shows in the UK supporting DOWN which will be very exciting for us, then we have a show in Holland alongside Monster Magnet , Graveyard, Red Fang and lots more. The plans for 2013 are still being made and I can’t really say anything at the moment but rest assured they are BIG plans and we are all very excited about it!

We’d like to thank you for this interview. See you in Greece in about a month. Close this interview adding whatever you’d wish. Thumbs up for another great album once again!

Thanks again to all our Greek fans, we really appreciate the support we get from Greece and we look forward to seeing you all at the shows for lots of beer and lots of headbanging! Stay Clean!!