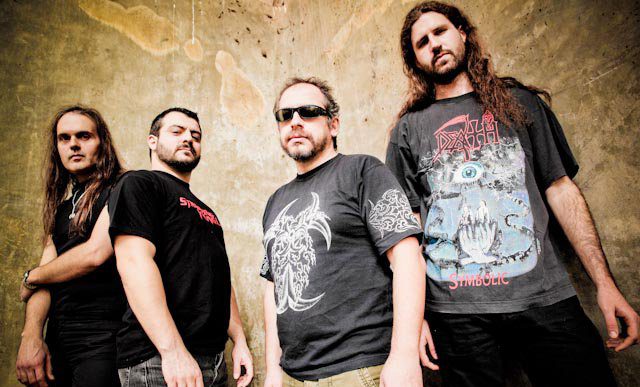 After a long period of time, one of the most historic bands of the Greek scene, Acid Death, are back with a new studio album called “Eidolon” and a couple of live performances scheduled for the near future. Metalpaths had the chance to talk with Savvas about the reunion of the band, their new album, and more! …by Panos “Thrasher” Bantzis

Hello Savva, welcome to Metalpaths and congratulations for your new album! New studio album for Acid Death after a long period of time. Can you tell us where and when was “Eidolon” recorded?

Hello and thank you for this presentation! Yes, ACID DEATH is back after almost 12 years without official recording and “Eidolon” is our 5th official release. The album was processed from October/2010 till July/2011, it was recorded from September/2011 till March/2012 and it is out since June/2012. The recordings took place at two different places, drums were recorded at DEVA SOUNDZ with Fotis Benardo (Septic Flesh) at mixing desk and all the rest, guitars, bass, vocals, keys mixing and mastering, at our own recording place called S.I.A. recordings. The band made the production.

In 2001 Acid Death splitted and in 2011 you decided to return. Why was the band merged and how did you decide to return?

The band stopped in just one night back in 2001. The inner problems we faced and the entire bad view that fans had about our music, especially in Greece, made us to take this decision. Of course ACID DEATH was our life although I and Dennis Kostopoulos (lead guitars) were playing at other bands, Dennis still plays in INFIDEL, a really cool Doom/Stoner band. In 2009 there was the first though of trying to start the engine, solving the issues that created troubles in the past. Things didn’t work. But in 2010, with two new members in the team, Kostas Alexakis on drums (drummer in KINETIC) and Kostas GusK at lead guitars, me and Dennis, things worked really fine! You know, this band was our life for so many years and it was pity that things didn’t work a decade earlier… But no problem! The team is here and a new album of course.

Was it a hard process to put Acid Death back to action and find a new record company?

We worked really hard for that. You know, sometimes a return is really dangerous, having in mind that everyone keeps an eye to the past. We worked like a team and everyone offered its best, so the material for the new album was processed quickly. With the CD’s full production ready we tried to reach the labels, we reached about 35 labels and we were really glad to see that we had positive answers from 6 of them. Finally we got deal with Austrian NOISEHEAD records (www.noiseheadrecords.com) and “Eidolon” was released by them. Things are working fine with the label too. 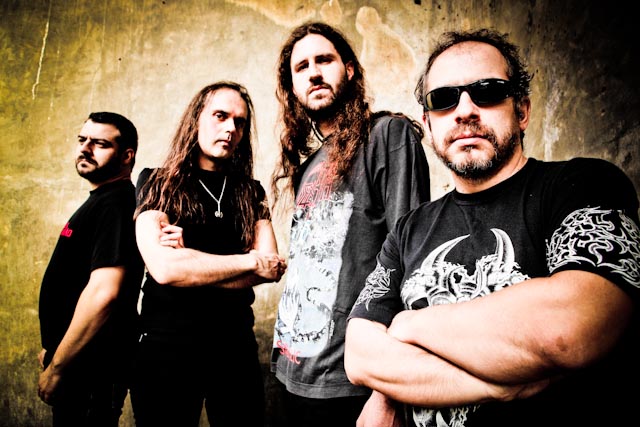 How do you see “Eidolon” comparing to your previous albums?

“Eidolon” is a more “angry” “Random’s Manifest” of 2000. That’s the feeling that it offers to most of the old fans. For the new ones “Eidolon” is a technical Death Metal record in the veins of DEATH, ATEIST, CYNIC and all this Technical Death Metal from Florida, the same time that it includes elements and influences from Progressive Rock, Industrial and even Ambient. I dare say that everyone can find interesting things in this record.

The album has variety of songs. Some of them are in the classic Acid Death style and some others have a couple of different elements like “Odious Maggots” for example. My opinion is that they sound very interesting. Should we expect more new elements in the music of the band in the next albums?

Yes, as I told you there are a variety of influences in the album. They are the influences we have as musicians and as metalheads of course. Who knows…Next albums will be a real madness!!

What are the reaction of the fans and the press about “Eidolon” so far?

Things worked really fine! The album took and still takes very good reviews, the thoughts from the fans that already have it are positive too. It is the biggest paying for us to see that there are some people out there that love our work and have a good word to say! Believe me, this is the biggest present for us!

Tell us some things about the lyrics of the album. Do they follow a concept or does each song deal with a different subject?

The lyrics have to do with the horrible side of life, describing true or phantastic stories. There isn’t a complete concept behind them, there are lyrics that could be a reality for some people.

You have scheduled a couple of live performances in the near future. Tell us about them.

Yes, at first we have arranged a small tour over Greece, called “Eidolon-Greek Tour”. There are 4 appearances scheduled, 20 October at Athens (AN club), 21 October at Thessaloniki (Eightball club), 28 October at Kastoria (Blue Note club) and 3 November at Trikala (Kentriki Plateia club). At first 2 appearances we will be co-headliners with legendary UK Thrashers ONSLAGHT, that come in Greece during their “The Full Force” tour. After Greece hopefully we will have some positive answer for a slot in a small European tour maybe during summer of 2013…

What are the plans of Acid Death for the near future?

We are still working on album’s promotion. The live appearances is something that we are interested. After those we will start working on new material. There are some ideas that are already on the table but it is too early to speak about a complete new work.

Thanks for your time and good luck with the new album and your live performances! Close this interview with as you like.

Thank you again for this presentation! All the best to everyone! Check us to the following sites: www.aciddeath.net