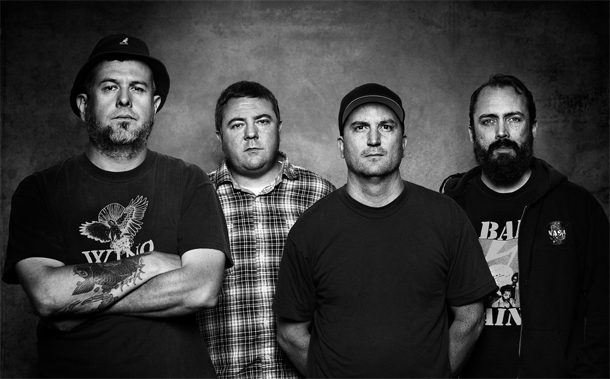 Clutch recently announced the title of their new album “Earth Rocker” that is going to be released in March 2013. Metalpaths contacted with the frontman of the band Neil Fallon who talks about the current status of the album, the new songs and the upcoming plans of the band…by Panagiotis Karagiannidis

* You can listen to the audio format of the interview here.

You recently announced the title of the new album “Earth Rocker”. Tell us a few things about the current status of the record. Have you finished with the recording process?

Well we recorded the album with Machine with whom we did “Blast Tyrant” and we were trying to come up with the title for the record. We just chose “Earth Rocker” for the reason that it describes the record as a whole cause its a straight up rock n roll record. We couldn’t come with anything better than that and we thought that this is pretty good though.

It’s been four years since the release of your previous record. How has your life been with Clutch during those years and why did it take you such a long time to release a new album?

Well its been about four years since we were touring non-stop and I know we would like to come up with a record sooner. We are really a touring band and we’ve been really busy, which is a good thing, but we never had the time or the opportunity to stop and write new songs. I don’t think we write a lot on the road, we usually write better when we’re at home, it keeps us kinda concentrate on it. So we need to take couple of months being dedicated just on writing even before we start the recordings. 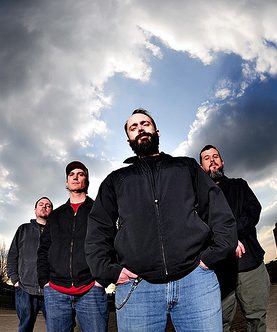 Tell us a few words about “Earth Rocker”, how would you describe it to the fans and what do you personally expect of this record?

Well we haven’t mixed it yet so I haven’t heard the last production but judging by its recording its definitely the fastest and heaviest Clutch record that we have ever done. The last Clutch records had more of a blues influence and this record almost has an absent of that. I think touring with Motorhead had a big affect on us. We’ve toured with them before but this time we really listened to them in a way, they were really fast and a little lightbulb go of our heads and that took a big part on writing this record.

So Motorhead affected Clutch on doing a heavier record?

I think so…. well we didn’t say “let’s sound like Motorhead”, its just the songs we kept playing faster . We have never gone in a record saying we want to sound like this or that. It’s more a collective instinct. I know we had a really good time on that Motorhead tour and that played a big part on it.

What commons and differences can you find between “Earth Rocker” and your previous releases? Is there an album of Clutch that you can say its similar to “Earth Rocker”?

I think it’s more similar to “Blast Tyrant”. Machine recorded “Blast Tyrant” and this one so his production techniques are very unique and pretty intense and I think that eventually, that kinda comes through on the production, the values of the record.

So is it gonna be a heavy and fast album as a whole or we could maybe expect mid-tempo songs such as the acoustic version of “Regulator”  for example?

Well we recorded 14 songs and we gonna put 10 of them in the record. I know one of them for sure is called “Gone Cold” which is a lot like “Regulator” they are kind of cousins in a lot of ways. Its more finger-picked blues style, very mellow and slow and I enjoyed recording it because it was very difficult. I think it’s harder to record slow mellow music than hard and fast. The last track called “The Face”, is kinda more mellow but I can say that 8 out of 10 songs are pretty hard hitting.

I read on the web that you are going to use harmonicas once again. Does it mean that we should expect another “Electric Worry”-style song on the new album?

In some way the self-titled song “Earth Rocker” is a bit like “Electric Worry”. There’s no slide guitar on it, vocally is similar to “Electric Worry” and is like a tribute to screaming style of American blues singing,

You have a multiple role as a musician in Clutch. If you have to choose between vocals or guitar what would you prefer?

I would say vocals, because I enjoy writing lyrics. Sometimes it’s very frustrating but I think that’s more my skill than playing guitar, I’m still trying to learn how to play guitar. I don’t consider myself a very good guitar player. I like singing because I get to lie to people every night and tell these stories and people accept that. It’s a great luxury to be able to do that.

Here I have a fan submitted question. A fan from facebook asks what does your family think of your status as a stoner rock-star?

(Laughts) Well, talking about my wife, that’s how I met her, she’s a Clutch fan. And my son who is 2,5 years old really likes the band. My mom and dad I think that now that I’m in a band for 20 years they finally accepting the fact that this is what I do for a living but I think that if they had it their way, I would have gone into another line of work and that’s usually the case.

What music do you listen to in your free time? Do you have any new bands or albums to recommend?

Well we toured with two great bands, a band from California called King, they’re very good, and another band called Monstro, their kinda more prog. I have been listening to Graveyard latest, they are one of my favorite bands. And a couple of older rock n roll bands like Deep Purple and ZZ Top but I always listen quite a bit of that. 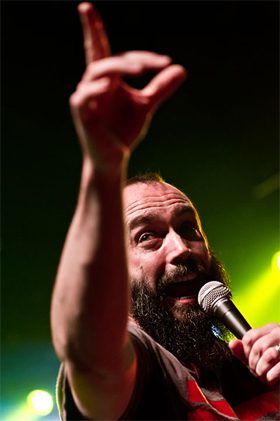 “The Regulator” has been used during Nascar 2012 seasons and also “Electric Worry” has been used as a goal celebration song for hockey games. Do you feel that Clutch music fits with sports and why?

Well its hard to say, cause I m not the biggest sports fan but if I do like a sport it’s hockey. I guess any kind of song that comes as a theme in an arena has to be really simple and it can’t be more simple than “bang bang bang”. You know when you get a crowd chanting something. I surely didn’t write that song with that in mind. I saw a video from the hockey arena in Vancouver so I could see what its like to have 20 thousand people singing the chorus of the song witch it was pretty impressive I got a big kick out of it.

Would you write a song exclusively for a sport team?

I think we would do it if we were asked as a one off, but we would never say “well this albums needs a song that maybe a sports team would like”. I think that would be very foolish think to do. But if we were asked we would try it. Its pretty flattering to have someone ask something like that.

The last years you visited Greece twice. What are your memories from the live performances?

Such a great time, both times! We’ve been told over and over again you “can’t go to Greece because no one is gonna come and see you there, Clutch is unknown” and we took a gamble and the shows were sold out and they were both fantastic! We made some good friends over there, they were nice enough to take us around, we went to the beach, ate a lot of good food and I found the hospitality to be really exceptional and I felt very welcomed in Athens.

Can we hope to see you in your next tour again in Greece?

I certainly hope so, I think it would be dumb not to come after the success of the last two shows. Clutch usually play on north western Europe and its been difficult fpr us to get further south and on to the east and Athens helped us get those doors open.

So Neil, your new album is going to be released in March. What’s next?

Well we have to mix the album, that’s the immediate one. We have a dozen of shows for the rest of the year in United States and then we have a very short-pressed tour in January. Hopefully this summer will be a lot of European festivals, maybe you will see us back to Greece in a festival or for a regular night club show. And when “Earth Rocker” comes down we are gonna be touring for this record for a year and a half and before we know it it’ll be time to start thinking for the next record.

Thank you for the interview Neil. Do you have any message for the fans?

The only thing that I can manage to say is that there is earthrocker.com, we have announcements about the record and more information as the day approaches. And we hopefully will be in Greece sooner or later.