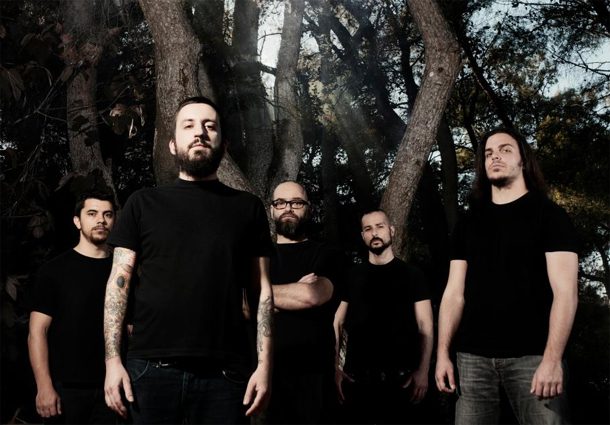 Having fresh the release of the new album “Static Apathy In Fast Forward”, Metalpaths grabs the opportunity to talk with Tardive Dyskinesia’s frontman Manthos S. who talks about the new record, their influences, the future plans and their memories touring with Pro-Pain…by Kostas “Krotidas” Triantafyllidis

First of all I would like to say I am really proud for you being a Greek band that succeeded to release three really beautiful albums. Could you give us a short introduction about the band in case there are readers that haven’t heard of Tardive Dyskinesia?

Thank you very much! We are a progressive metal band from Athens/Greece formed in 2003. After 2 demos, we released our first full length album “distorting point of view” in 2006 via “Venerate Industries”. In 2009 released our second album “the sea of see through skins” via Coroner Records. In 2010 we went on our first European tour performing in 24 cities supporting Pro-Pain. Locally we’ve played alongside with many well-known bands such as  Darkest Hour, Intronaut, Meshuggah and Dillinger Escape Plan to name a few. Nowadays, our 3rd and most mature album titled “Static Apathy in Fast Forward” is out now via CTS Productions. 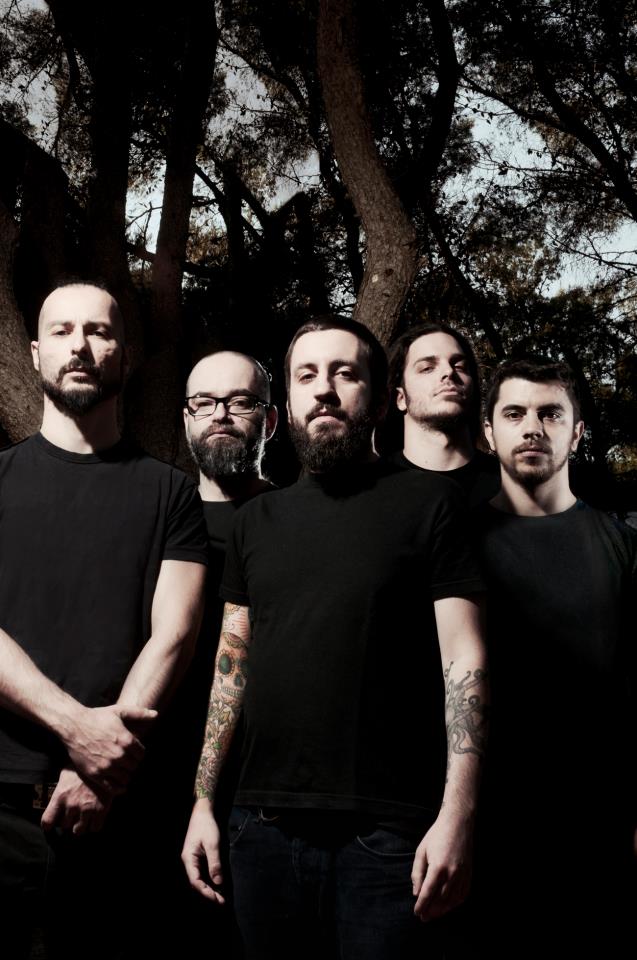 “Static Apathy In Fast Forward”. I would like to know how you feel about it. Did the final result meet your expectations?

We are very pleased with the result ! from all aspects. Besides, we wouldn’t release something that we weren’t 100% sure of. We’re glad people like it & that is the greatest achievement. Generally speaking, we like to evolve as musicians, particularly in the composition department. What one will observe in «Static Apathy..” in comparison to our previous 2 records, is that despite the progressive element being well noticed in our rhythmic parts, this time around we’ve added a lot more melodies & choruses.

It seems that through the recordings session you had great time. I can tell that by watching your video posted on the internet. Do you believe that this is reflected on the music result of “Static Apathy In Fast Forward” and how?

Haha! I hope not ! Truth is, we’re 5 immature individuals that like to have a good time, meanwhile we love music & take very seriously what we do. Don’t really know how that’s possible …

I have read in many interviews the members of a band saying that their last album is their most favorite. Do you think and feel the same?

Whatever we do we enjoy doing it. We think of our albums as our children, so…. we love em all. Of course we’re more “excited” now with “Static Apathy…” since its more fresh. Now, if its our best album, its up to the audience to judge that.

Some say that in a group of people there should be a leader so that they can stay together and work more effectively as a team. What are your thoughts on this statement and how does Tardive Dyskinesia work on the composition process?

Yes, that happens in most bands and the same applies to us. I’m the one who “move the strings”. Since day one I’ve handled the best part of the songwriting, especially on «Static Apathy in Fast Forward”. That doesn’t mean that rest of the guys don’t contribute, on the contrary each one of us adds his own little flavour, making the end result even more diverse. We’re not really “jam” type of band. We usually like to work our ideas each one of us separately at his own space, we then record them on whichever recording software suits us, we then sit down & listen to them & then comes the whole “studying” part individually & when we’re ready then come countless rehearsals.

Tell us a few words about the lyrical concept of this album. Does the responsibility of writing the lyrics lies only on you (as the singer)? If not who else contributes? 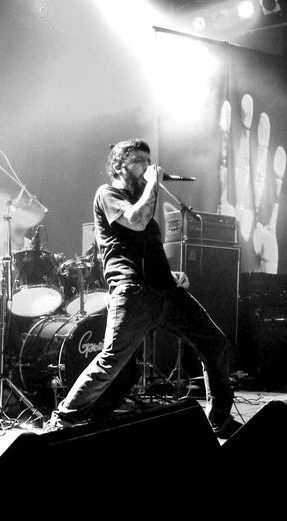 Whatever happens around us effects us, in a positive or a negative way, think of it like a source of inspiration. Personally it’s the human element that distinguishes the lyrics. Each track portrays something different. ALL of them though are based on various emotions, images & situations that we face daily & things that annoy us piss us off ! the apathy that we experience and the fast pace of modern day society. In our earlier albums, the lyrics were mostly written by our previous drummer Stavros, who had a “different” way in writing, saying that, Petros (guitarz) also contributes to the lyrics department. However, on this album I am responsible for most of the lyrics.

I know that labeling your music is difficult, so I would like to ask how could you describe your music to someone that doesn’t know you at all? How would you try to convince him/her to listen to you band?

If I could “generally” speaking describe to someone what we play, I would tag us as «progressive metal». Now, for those that like to use 1000 different “tags” in front of Metal, Id have to handle it otherwise. «Τardive Dyskinesia play extreme rock/ metal with “spastic” but simultaneously groovy parts, atmospheric/melodic parts & refrains which you can sing along to, without them falling into the “radio friendly” category». If you dig records that need time, for example those that require more than 3 “listening sessions” in order for you to have an idea of what’s going on then I highly recommend this for you !

We listen to different things… Personally: Gojira, Textures, Tesseract, Devin Townsend, Cynic, Death, Mastodon but also “older” such as Rush & King Crimson, are a key aspect of my influences. In general we are open in listening to new stuff & “feed” our inspirations. From electro/dub & post rock, even extreme brutal death metal. Lately ive been hooked on this French progressive rock band, Klone. You definitely have to check out their latest album.

In the recordings we see you helping with the guitar sessions. How did it come and you just sing on stage?

When the band started, besides doing all the vocals I played guitar as well. Later on, with the addition of a second guitarist I took charge of the vocals only (when performing on stage) thus being more flexible while I’m singing, letting the guitars be more diverse without having to limit ourselves.

You have shared the stage with many popular bands such as Meshuggah, The Dillinger Escape Plan and Obscura. What are your experiences from these gigs?

Being able to perform alongside one of your favoutire bands is every musicians dream. When we first started exploiting this sound, never in our wildest dreams did we think that we would share the stage with those bands. Meshuggah & Dillinger Escape Plan, are very serious at what they do & what we gained from this is their professionalism while on tour!

And then of course Tardive Dyskinesia went on tour with Pro-Pain in 2010 throughout Europe. Any good or bad memories of it?

We have lots of good memories. The Pro-Pain tour was our first European tour, so you can imagine how excited we were ! It was like a huge party, that lasted 1month. We met a lot of people & made fans across Europe & that was the main point.

As a Greek band yourselves, do you believe there is a golden recipe for all these small bands trying to get known? How did the internet “fashion” work out for you?

There is only one “formula”, good songs, careful production, practices & promotion. The “world wide web” is a promotional tool for all bands, but that doesn’t mean that by acquiring more “Likes” and profile views, that you’ll “make it” ! or it makes you a better band.

I think you have some gigs planned already for 2013. I hope you will give us some details on them. Any plans on a new tour for promoting “Static Apathy In Fast Forward”?

We’ll start of with a Greek Tour that goes something like this: 2 February | Politistikes Apopeires/ Nea Makri, 9 February | Boxx Live Stage / Γιάννενα, 22 February | Eightball Club / Thessaloniki, 23 February | Stage Club / Larisa, 24 February | Patra, 24 March | En Plo / Agrinio. There’s more were that came from. We’ve been confirmed for some European Fests. as well, which will be announced later on !

Now it is time for you to say anything you like. You can send any message through these few lines to anyone who love you, like you, sympathize with you or even hate you (as a band or as a person)!

We don’t hate anyone ! we want peace and love all over the world, keep calm and listen to Tardive Dyskinesia! Thanks for the interview!