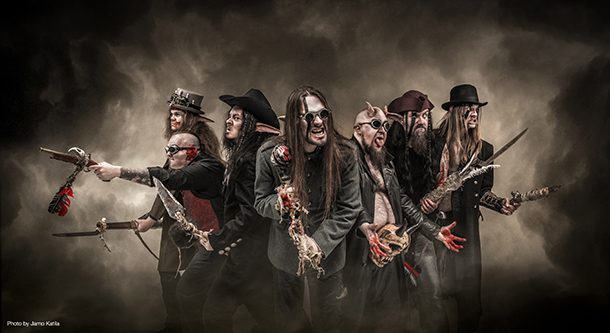 Just a few days before the release of Finntroll’s new album “Blodsvept”, Metalpaths contacted with the frontman of the band Mathias “Vreth” Lillmans who had a really tight schedule doing a dozen of interviews at Century Media’s headquorters in Dortmund. Let’s see what Mathias has to say about the new album and Finntroll in general…by Stella Papaspyropoulou

So, you are about to release your sixth album and you have said before that it will be combining your trademark sound with even more influences from non-traditional genres of metal. How can we expect it to sound, in comparison to your previous works?

Oh, if you compare it to “Nifelvind” for example, you can say that in this album the sound is more natural, it’s not that old produced sound, the guitars a little bit more aggressive than before and the keyboards are a bit cleaner; there’s a little bit less keyboards, a little bit like stripped down. We are concentrating on the main melodies and the main riffs. It will be the trademark Finntroll sound with the melodies and the folk twist and there’s gonna be some new turns also. This album is actually cool.

It will be interesting to hear! I don’t know if you’ve seen it, but in November, a fan filmed video of one of your new songs was released on YouTube. Have you got any feedback from that? What the fans think about it?

Oh yeah! We heard really really good stuff about it. And also when we played it during the Heidenfest extended shows, we played one new song every night and you could see people were listening the first half minute and were like “is this a new song?” and were a bit skeptic and then comes the chorus with this low beat and the nice melody and people were like crazy. That was the best feedback we could ever have! 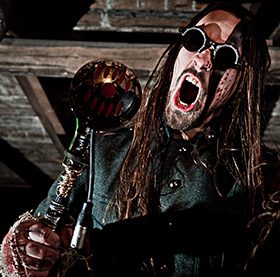 Certainly! I saw the video and the reaction of the world was crazy!

It is good! They really liked it. The future of this album looks really positive.

I want to ask you about the lyrics. From the beginning, with Katla, the lyrics were written in Swedish. Do you believe that this language fits better to your songs?

This language has some melody, for example Finnish doesn’t have, or English. I think it fits with the melodies and it’s a big part of the Finntroll sound to be singing in Swedish.

I see. About the line-up changes, you are in a band that has gone through quite a few line-up changes. But many suggest that these changes can be a good thing and refresh the sound somewhat. Do you agree with that?

Of course! But I think we have a line-up now that has been for the longest time. It’s been almost seven years with the same line-up. In the 15-16 years of Finntroll, it’s the longest with no changes, so that’s pretty cool. Maybe we are doing something right this time.

I’d like to talk a bit about the artwork of “Blodsvept”. I have to say that all your artworks are really cool, very different from one another and I’d say that they could fit in other metal genres, too. For example “Ur Jordens Djup” it’s kind of doom metal, it looks like doom. And the first one could fit into black metal. But for the first time we see a finntroll on the cover.

It’s sort of the character from the song “Blodsvept” that’s on it. This kind of war hero, gladiator kind of thing.

Oh, so it’s not a finntroll…

You should see the rest of the cover! I saw it two days ago here in Century Media office. It looks really really cool and Skrymer has done one painting for every song. It looks really pretty, fucking awesome. And you know, all the paintings are connected to the lyrics in some way.

If I’m not mistaken, Skrymer has done the previous artwork, too?

Well, I didn’t know that!

He’s doing all the artwork of Finntroll, like all the t-shirt designs and all the album covers. Everything that’s related to paintings. That’s his work.

That’s really cool! Have you ever thought of having a finntroll on stage, like Eddie?

Haha, I guess we have many of them on stage actually!

I see! Well, I’ve seen on your official facebook profiles, as well as on your blog that you post different things about the recordings, how the mastering of the album goes and you ask for opinions on your new artwork. How important is it to you such a communication with the fans?

Communication with the fans is the best promotional tool ever. And I’m the kind of guy that likes to talk to people, to keep in touch. I think that’s an important part, to know what kind of music, what kind of style the fans like. It’s a good source f inspiration.

So you take into consideration the opinions of the fans?

Yes, to some extent. In the end it’s we that decide what we do. Of course, we listen to everybody and appreciate the opinions.

Yeah, I believe that this communication can give you the best results. So, for your previous album “Nifelvind”, you did three covers, three very different covers, and I believe it’s not something you usually do. What’s your opinion on covers?

These covers are actually pretty cool to do. The Metallica one is a metal song. Rock songs are easy to do. It’s funny to see what you can do with other people’s songs and turn them to sound like Finntroll. We were having so much fun during that session. We were laughing our asses off and doing stupid stuff all the time. You know, when it’s about covers, you don’t really have to be that serious about it. You can play and have lots of fun.

Yeah! And the fans, the audience in a live show can have so much fun with the covers.

Yes! We have played them a couple of times live. The Pet Shop Boys cover we haven’t yet played. On the last full European tour, every night we played the Metallica cover, and we also did the Oingo Boingo cover. It was pretty fun.

So, in 2010 if I’m not mistaken, you filmed your live performance in the Netherlands for a DVD.

Well, we have been discussing it, but it’s getting so old. It’s two albums old. So we don’t really know what to do with it. It took so long before we got it to look nice. There was bad communication with the company and they didn’t like our version of how to do it and from our point of view it didn’t look good in the beginning. They were editing it for a really long time to make it look like something we really want to release. So, by the time it was finished we changed the record company; that was done with Spinefarm and we are in Century Media now. It’s a little bit hard to know how to release it. We hope we’ll be able to release it soon, but we don’t know how yet.

I hope you’ll find out soon enough! About the change of labels, that was my next question. Are you satisfied with your new house let’s say?

We’re really really happy. The cooperation and everything work really nice. It’s easy to work here. Every time you are here at the office, you can really feel that it’s a big family and everybody gets along so well. Everything is really cool. I really appreciate the fact that we are here and we are able to work with these guys. It’s a cool label and you know, it’s much bigger and more high profile than Spinefarm.

That takes me back to 2011, when you had an interview and you said that folk metal is getting more and more popular. You were in the US back then. You said that in 2-3 years, it will be going down in Europe and up in America.

Yes. That was exactly the set in 2007 that I think that folk metal was really high in Europe and I said around 2010 probably it will be on its biggest, 2010-2011… I knew that folk metal was going to be like a trend, but now it’s going down a little bit. But not much, you can feel it with the concerts. In 2010-2011, we played all the time and it was like Europe, Europe, Europe. Now the market it going up in America these days. Over there, they’re pretty new to all this kind of things. And in this area we’re not able to do the same amount of concerts, as in Europe. Even the audience is going to be a little bit different. I think that’s because of this retro metal thing that’s in right now, doing stuff that sounds like the 70s; occult metal bands are on the rise right now.

Yes they are! Have you ever thought of Asia as a new market? And to go there?

We’ve been a couple of time to Asia and it’s really good. I am really surprised that we don’t go there more often. I know that for this album we’re going to be touring Japan probably. At least I hope so. And maybe a little bit more in China. I really really hope that that goes well.

For 2013, you’ve booked a performance in Hellfest and you’ve already performed in some big festivals, but I’d like to ask you; what do you prefer? Big festivals or small clubs?

Definitely small clubs. Festivals are cool in a way, because you have big PA systems and when you are screaming you can hear your voice going all over the audience, like 25000 people. It’s a cool feeling. But when you are a singer, you really like to interact with the audience and talk to them between the songs. In festivals it’s a little bit impersonal, being so far away. In the small clubs, you can touch the people in the front row and when you’re screaming, you scream half meter from their faces. That’s something that I really like. It’s more intimate, more personal in some way.

I see. So, you have booked already three festivals for 2013. What are your other plans?

Of course, there’s going to be more festivals and probably next week we’re gonna announce some kind of European tour…

Are we going to see you by any chance in Greece?

We have quite a big audience for folk metal. It would be good to have you here! To see you live!

We really hope that someone is going to book us there sometime.

I hope too! That was it from me. What would you like to say to close this interview?

Keep trying, harassing your local club owners to bring us to Greece! We are really anxious to come and play to your beautiful country!

Yes! You do so! Thank you for this interview and for you time!