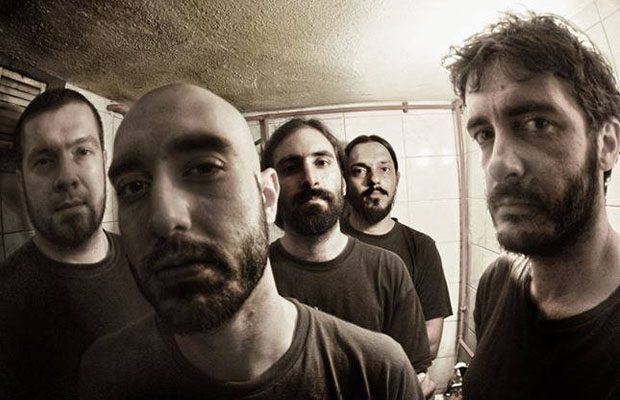 Having shared the stage with bands such as Napalm Death, Fear Factory, Entombed and Rotten Sound, SLAVEBREED is for sure a band which Greece should be prouf of. A few days before METALPATHS Festival which is going to feature SLAVEBREED among other great bands of the Greek death metal scene, Metalpaths caught up with the band to have a chat about everything around them from the beginning to today.

PS: Each member of the band contributes to the answers of the interview below.

First of all it’s nice to have you interviewed here. We know what you are capable of, but would you mind explaining the Slavebreed story to the possible new fans from the beginning?

The band started in late 2004 by Pavlos and Kostas, from the remains of Pavlos’ older deathcore side-project band with the same name. After some line-up changes we ended up as we are today, having released two full lengths, one split, a demo rehearsal and have taken part in some compilations and tributes. Right now we work on new material for two split 7” releases coming up soon.

I believe that Slavebreed are much more than a grindcore band, as your sound is more flexible to my ears than what someone else may think in the beginning. What is your perspective for your music and the approach in the creation of each track?

This probably happens because all of the members take part in the creation of the songs and all of us have different influences. One comes up with a song and then altogether will work on it, do changes and work on details if needed, until it sounds right. We are happy if people can notice this.

I’d like to know the feeling when you released your first album and finally got it in your hands. Describe us how a musician reacts in such an incident and how much proud of yourselves or your hard work finally felt.

I remember how thrilled we were after our first full release, Pain Syndicate. After a few years’ time, no matter the length of the release, we still fill the same anxiety and excitement for each and every one of our releases.

In what state of creation do we find the band today? Which are the new actions of Slavebreed currently and when should we wait some further actions? 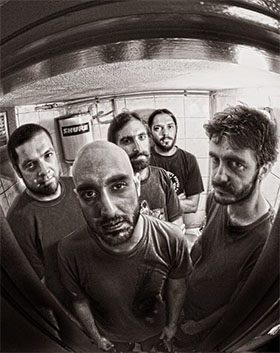 We are about to play a concert in Athens, our home town and then start a mini tour, consisting of five shows in Greece, Bulgaria and Turkey. After that and as I said before, we are in for two split 7” releases we are very excited about.

I’ve been able and lucky enough to see you live supporting colossal bands like Fear Factory and Napalm Death for example and seeing these band members watching you with awe, I felt like they saw something they didn’t expect. What is the response your music has had so far compared to what you waited while creating the band?

You know, we keep our heads down. It is not about expectations. It is how you respect and treat what you do. If you play to impress others, then you will lose the meaning at some point. So, we are just having good time while trying to create good music, and when other people or bands appreciate this, we are more than satisfied and in the right mood to continue what we do.

I’ve gone in Czech Republic twice and saw too many Slavebreed t-shirts I couldn’t believe it. A guy realizing I was Greek came and told me ‘’Are you from the country of Slavebreed? These guys kick ass, send them greetings’’. What kind of relationship did you develop with the Czech fans to make them love you so much?

“L’Inphantile Collective” has done much to help us get heard. We have been on tour all over the country many times and have developed really good and strong friendship with the people there. Visiting Czech Republic is always a pleasure.

A cliché question maybe but it would be really interesting to know the influences of the band members that you have in common and some others that are much different from member to member.

Everybody appreciates grindcore, of course. Either than that, some of us also listen to black metal, some others death metal, funk, sludge, even post rock… Variety! Some of those influences are quite obvious.

We’d like your opinion for the Greek scene’s evolution in general, are things really better and easier for a band compared to a decade or more ago? Is it a matter of hard work and skills only, or does it need to take things sometimes a little bit less seriously in order not to get stressed and finally achieve what you want?

Complicated matter. The level and ability of the musicians has raised much. Internet has helped a lot as well, but finally it all has to do with what you have in mind, on how much of your time you are willing to commit to the band, how many sacrifices you are willing to make and last but foremost the “attitude” you maintain through all that. If you want to be a famous “rockstar” by playing extreme music, then you are wrong. Try something else.

Are you satisfied with the releases 2013 had to offer so far, or do you stick more to older material in your free time listenings? Would you suggest some specific albums for the listeners to dig?

Both. If you look around there are hidden gems. Some really well hidden, some more mainstream and easy to find. Suggesting some is a bit unfair for bands to be left out. Open your ears and eyes and you will find what you like.

Your vocalist usually brings out the more loose side of the band, he’s kind of a capable stripper as well. Should we expect some kind of a show next time we see you blasting or it just comes out because you feel the crowd warmly connected to you?

It has to do with the mood being set between the people and us at that moment. It is not planned from before, of course.

We’d like your opinion for the turn of events regarding the promotion of bands the latest years. Myspace, Facebook, Reverbnation and such nets have helped a lot or did more harm to music, as many bands have gathered and there is too much information and music to listen to compared to latest years?

Our opinion is that everything can turn good or bad, depending on how you use it. That goes for every thing in life. Every aspect of it. As far as the music goes, it is always nice for bands to promote their songs through the internet and let them be heard by as many people as possible. After all, those who are really interested in the band’s material will eventually get a hard copy of their favorite music. That way they support their efforts and keep them going on tour trips.

Last but not least, we’d like to wish you the best for the years to come because we really believe you deserve it. As usually, the last comments and fillings to what we didn’t ask belong to you. Grind on!

Thank you for this interview! It was a pleasure. Feel free to contact us via our mail and come say hello in the case we play somewhere near you. Cheers!