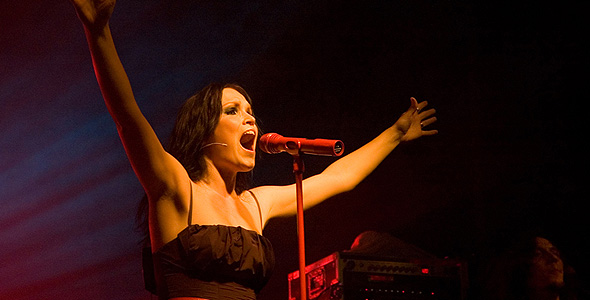 Former NIGHTWISH singer Tarja Turunen has released a three-minute trailer for an upcoming full-length concert video that was filmed on December 8, 2007 in Kuusankoski, Finland. “We will soon let you know when and how to download it for free!” reads a posting on Tarja’s web site.

Watch the trailer below.

Turunen released her new solo album, “My Winter Storm“, in the U.S. at the end of February. The CD was made available in two exclusive U.S. versions via Fontana: the standard and deluxe editions (the latter featuring extra tracks not released elsewhere, as well visually stimulating bonus DVD content).

“My Winter Storm” was produced by Daniel Presley (FAITH NO MORE, JEWEL, THE BREEDERS), who has been joined in the studio by a truly stellar line-up of musicians: Doug Wimbish on bass (LIVING COLOUR, ANNIE LENNOX, JOE SATRIANI, JEFF BECK, MADONNA, ROLLING STONES), Alex Scholpp on electric guitars (FARMER BOYS) and Earl Harvin on drums (SEAL, PET SHOP BOYS, AIR), a player personally selected by Tarja after she saw him stealing the show at a SEAL concert. Keyboards and programming, meanwhile, are being provided by Torsten Stenzel, whose previous credits include NELLY FURTADO, MOBY, TINA TURNER, VANESSA MAE and more.