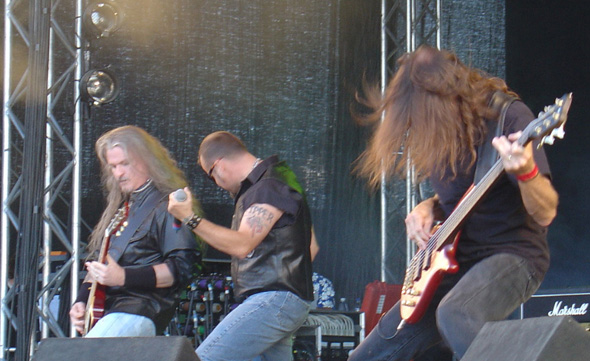 American metal powerhouse ICED EARTH has announced the continuation of its current “North American Crucible” with 11 more shows in the U.S. and Canada in November. “People kept on reaching out to us and questioned why we weren’t coming to their cities — well, here’s your answer! I cannot wait to see more Minions out at these shows!” says ICED EARTH mainman/songwriter Jon Schaffer.

Support on the shows will come from DIVINE HERESY (main support) and EARLY MAN (opening act).

After the overwhelming success of the “Child Of The Wicked” VIP packages, ICED EARTH has decided to give its fans the chance to get close to the band again and is offering VIP packages for all shows starting tomorrow, October 7, 2008 at this location. ICED EARTH is also planning something very special for members of the band’s official fan club, “Minions Of The Wicked”.

The interview lasts approximately 40 minutes and is available for download at this location.

“The Crucible of Man (Something Wicked Part II)” sold 6,700 copies in the United States in its first week of release.

Professionally filmed video footage of ICED EARTH’s June 28, 2008 performance at the Graspop Metal Meeting in Dessel, Belgium can be viewed below.