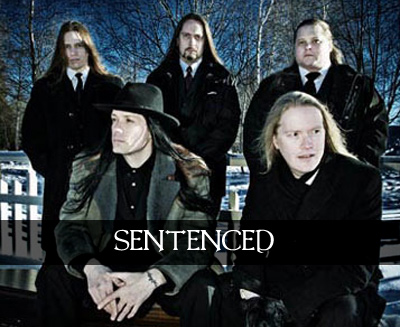 The surviving members of the long-defunct Finnish band SENTENCED have issued a statement regarding the passing of the group’s former guitarist and main songwriter, Miika Tenkula, who was found dead at his home on Thursday, February 19. He was 34 years old. The statement reads as follows:

“SENTENCED mourn the loss of Miika Tenkula, a dear friend, a truly remarkable artist and musician, and the very soul of what used to be SENTENCED. Rest now, brother — in your music and our hearts you will live forever.”

A farewell video can be viewed below.

The official cause of Miika’s death has not yet been released.

The former members of SENTENCED were presented with the platinum award for “Buried Alive” on August 14, 2008 at Century Media Records’ 20th-anniversary party at the Tavastia club in Helsinki where ex-SENTENCED singer Ville Laihiala’s new band, POISONBLACK, and labelmates NORTHER and KIVIMETSÄN DRUIDI performed.

An e-card for “Buried Alive” DVD, which captures the Finnish band’s final performance in their hometown of Oulu, Finland on October 1, 2005, can be accessed at this location. The e-card features a full mock-up of the DVD menu and a taste of “Buried Alive”, including one full live song as well as snippets from all chapters.

SENTENCED’s last-ever studio CD, aptly titled “The Funeral Album”, entered the Finnish national chart at position No. 1 back in June 2005. The follow-up to 2002’s “The Cold White Light” was recorded primarily at Finnvox and Tonebox studios (both in Finland), and mixed and mastered at Finnvox. Producing the effort was Hiili Hiilesmaa, who also worked with SENTENCED on the group’s previous two albums, 2000’s “Crimson” and “The Cold White Light”.