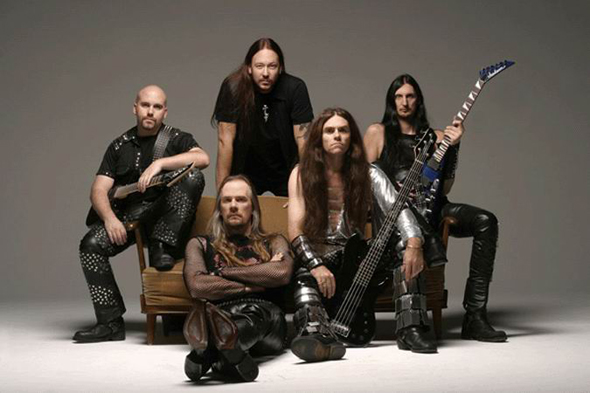 On Wednesday, February 18, Swedish metallers HAMMERFALL played at the Debaser Medis in Stockholmas part of a live broadcast of the SVT production “Popcirkus”. Watch two songs from the performance below.

HAMMERFALL’s new album, “No Sacrifice, No Victory”, was
released in Europe this past Friday (February 20) via Nuclear Blast Records. The CD was recorded in part at Andy La Rocque’s (KING DIAMOND) Sonic Train Studios in Varberg, Sweden and includes an instrumental written by the group’s latest addition, guitarist Pontus Norgren (THE POODLES, TALISMAN, GREAT KING RAT), as well as a song entitled “One of a Kind”, which was composed as a collaboration between HAMMERFALL guitarist Oscar Dronjak and IN FLAMES axeman Jesper Strömblad (who was a member of HAMMERFALL in the band’s earliest incarnation). The cover artwork was created by Sam Didier, while Thomas Ewerhard was responsible for the CD layout.

“No Sacrifice, No Victory” track listing: