The Greek legends Rotting Christ will give a special show at Eightball Club in Thessaloniki of Greece on Saturday 21th of March to celebrate their 20 years anniversary.

The band’s performance will be basically based on their first four legendary albums “Passage To Arcturo”, “Thy Mighty Contract”, “Non Servianm” and “Triarchy Of The Lost Lovers”.

Since Rotting Christ were lately more focused on their latest works like “Theogonia” and “Sacntus Diavolos”, it will definitely be a special show for the fans.

The gig will be opened by the support bands; Disembowel and Ravencult. 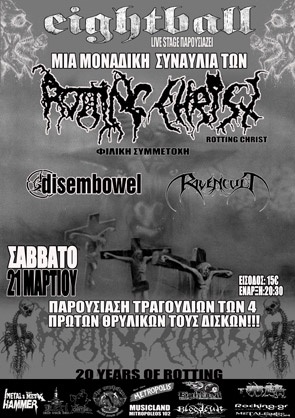