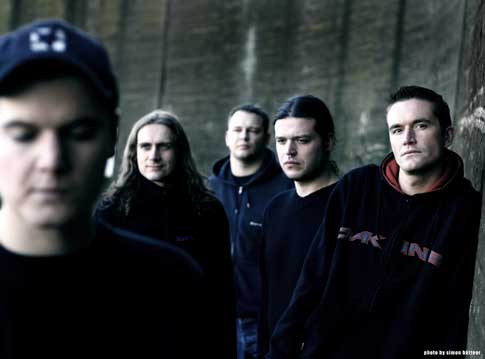 Germany’s hardcore fusionists HEAVEN SHALL BURN have set “Bildersturm – Iconoclast II ” as the title of their first DVD.

Commented guitarist Maik Weichert: “We can’t believe that we now have the chance to finally hold our first DVD in our hands!!! We did not expect that it would be so much hard work to get it done, but, of course, it also was loads of fun to put this together.

“Since we could not decide which of the two shows to use on this DVD, we decided to include both of them! The show at Summer Breeze festival last year and the one in Vienna [on September 12, 2008] were just equally incredible and watching them still gives us goose bumps!”

In addition to the live footage, the DVD will include a comprehensive documentary about HEAVEN SHALL BURN and loads of additional content, details of which will be announced soon.

“Bildersturm – Iconoclast II (The Visual Resistance)” will be available in three different formats, one of them being a limited and very special edition threedisc box-set. A late May release via Century Media Records is expected.

In other news, HEAVEN SHALL BURN has finished filming a new video for the band’s cover version of the EDGE OF SANITY track “Black Tears”, which appears on HEAVEN SHALL BURN’s latest album, “Iconoclast” (2008). The clip is expected to make its online debut soon.

Capital Chaos’s video footage of HEAVEN SHALL BURN’s April 11, 2008 performance at The Boardwalk in Orangevale, California on April 11, 2008 can be viewed below.

“Iconoclast” entered the German Media Control chart at position No. 21. Artist extraordinaire an up-and-coming visionary for cutting-edge art Bastian Sobtzick created the artwork for the CD.