David Marchese of SPIN.com recently conducted an interview with SLAYER guitarist Kerry King. An excerpt from the chat follows below. 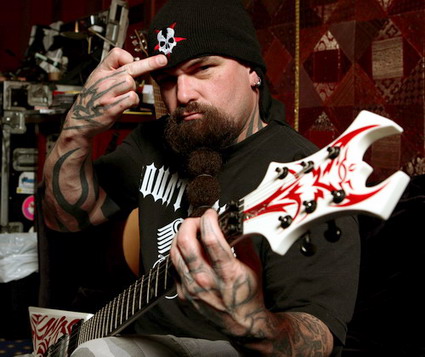 SPIN.com: There’s already a lot of buzz about “World Painted Blood” being one of the band’s strongest albums in some time. Did you guys have the sense when you were recording and writing it that you were on to something good?

Kerry: Yeah, we did. It’s hard to say why exactly, but I think there was just a really good vibe in the studio. This time, instead of bringing in songs that were pretty close to being done, Jeff [Hanneman, guitar] and I mostly worked stuff out in the studio. So I think that might have had something to do with it. And also we’re comfortable again with Dave Lombardo being back on drums. Last time around, on “Christ Illusion”, we had to sort of get used to playing with him again. Not anymore. His playing is such a big part of our sound. SLAYER is me, Jeff, Tom [Araya, vocals/bass], and Dave — that’s what makes us who we are. So what you’re hearing on “World Painted Blood” is pure SLAYER.

SPIN.com: Something I’m curious about with metal bands is how, given that you work within somewhat predefined stylistic boundaries, you’re able to keep it fresh. Are there ever times when you feel like every good heavy guitar riff has already been written?

Kerry: I think no matter what kind of music you play, there will be moments when you feel like it’s all been done before. It’s really a matter of just putting in the time. If you keep working, and don’t settle, you’ll eventually find something good — though I won’t sit here and tell you that every riff on every SLAYER song is completely amazing and original.

SPIN.com: So you never get the urge to bring a slow jam to a SLAYER rehearsal?

Kerry: [Laughs] Nah, man! I guess Jeff brings in some pretty weird stuff sometimes. But I’m a metal fan. Metal is what I like listening to. Metal is what I play. When I sit down with my guitar, that’s what comes out. My brain wouldn’t even think to do something else.

SPIN.com: When your last album, “Christ Illusion”, was released in 2006, it went to No. 5 on Billboard’s album chart. That was the highest charting album of the band’s career —25 years after you guys formed. Why do you think the band has been able to grow, and not just maintain, its popularity so far into its career?

Kerry: Well, chart numbers can be deceiving. An album doesn’t have to sell that much these days to show up really high on the charts. I doubt “Christ Illusion” sold more than [the band’s 1986 classic] “Reign in Blood” and I have no idea how high that charted. But I think the reason we’re still popular is that metal fans aren’t fickle like fans of other types of music. Metal is like a brotherhood. It’s not a flavor-of-the-month kind of thing. The dude who bought “Reign in Blood” gave it to his little brother. Then they were both into “Christ Illusion” — and they both bought that album because they actually care about the musicians who make the music they love.

Read the entire interview from SPIN.com.