CAVALERA CONSPIRACY has set “Blunt Force Trauma” as the title of its second album, due in March via Roadrunner Records. The CD was once again tracked with Logan Mader (ex-MACHINE HEAD/SOULFLY guitarist), who co-produced the LP with Max. Logan also mixed the follow-up to the band’s debut album, “Inflikted”, which has sold less than 50,000 copies in the United States since its March 2008 release, according to Nielsen SoundScan.

The brothers Cavalera co-founded SEPULTURA, the Brazilian metal band that redefined and established the genre outside of the U.S. and Europe. After Max exited the band, there was a rift between himself and his brother, one that was eventually repaired through the redemptive power of music. Some time had passed and Max and Igor were unable to resist the musical pull in their magnetic fields and their musical collaboration was renewed. The duo are back for round two with CAVALERA CONSPIRACY.

CAVALERA CONSPIRACY’s lineup is filled out by guitarist Marc Rizzo, who plays with Max in SOULFLY, and bassist Johnny Chow. 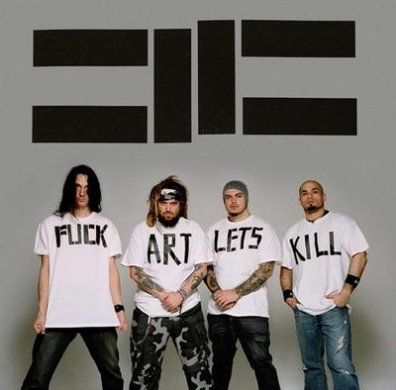 An audio recording of CAVALERA CONSPIRACY performing a brand new song, “Warlord”, during the band’s October 11, 2010 appearance at the SWU Music and Arts Festival at the Maeda Farm in Itú (about 43.5 miles away from São Paulo), Brazil can be streamed in the YouTube clip below.

In an interview with Triple J’s “The Racket”, Max Cavalera stated about the sophomore album from CAVALERA CONSPIRACY, “Yeah, [we] just got done [in May], so I just got back from the studio. It’s finished. We recorded 15 songs, 13 being originals for the album, and then we did a BLACK SABBATH cover, ‘Electric Funeral’, that’s gonna come out on a Metal Hammer compilation in Europe. And we did a BLACK FLAG cover, a song called ‘Six Pack’. We also had a collaboration with Roger [Miret] from AGNOSTIC FRONT — he sings on a song called ‘Lynch Mob’ that we did together in the studio in L.A.; he flew to L.A. to do this collaboration. I was really proud because, to me, Roger is like the godfather of New York hardcore; AGNOSTIC FRONT is one of the pioneer bands of the whole New York hardcore scene, so it was like recording with a legend of hardcore. The CAVALERA album is really intense; that’s all I can say about it. It makes the first album sound like pop music.”

Regarding the songwriting and recording process for the new CAVALERA CONSPIRACY album, Max said, “I wrote a lot of the stuff and I sent it to Brazil to [Igor] in the form of a CD — like four tracks of the riffs — so that he would be familiarized with the songs by the time I got to the studio. And then I brought another CD with me, which was, like, newer songs I had just got done [writing] for the album. And everything else we did in the studio together — me and him there on the spot. I told him the idea of making a very intense album with some songs being only a minute and a half, so it’s a cross [between] MINOR THREAT and SLAYER and CAVALERA CONSPIRACY. So the idea was really cool — Igor really liked that — and from that point on, the album just grew and song after song, every day a new song came in. And I’m really happy with it. I think people are gonna be blown away when they hear it. I think it’s a pretty cool album.”