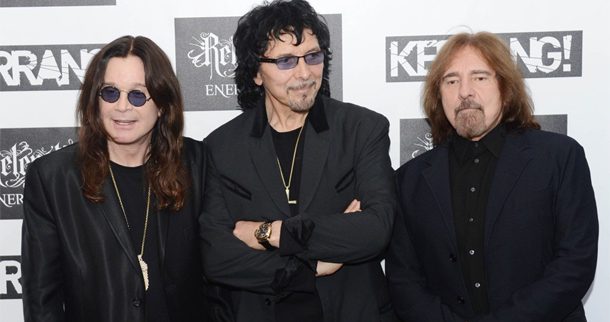 During an appearance on this past Friday’s (October 12) edition of the “Merrick & The Highway Patrol” show, which airs on Australia’s long-running rock station Triple M, Ozzy Osbourne‘s wife/manager Sharon was asked about BLACK SABBATH‘s current status and whether Australian heavy metal fans are going to see the band touring the country anytime soon.

“Of course you are,” Sharon replied (see video below). “[BLACK SABBATH are] in the studio right now with [producer] Rick Rubin recording. And they are going to be touring here in the spring of next year. Definitely.”

Original BLACK SABBATH guitarist Tony Iommi, singer Ozzy Osbourne and bassist Geezer Butler performed live together for the first time in seven years on May 19, playing an intimate show at the 3,800-person O2 Academy in SABBATH’s hometown of Birmingham, England. The show, which served as a warm-up for the group’s appearance at the following month’s Download festival, was laced with emotion and drama: it was the first live appearance for Iommi since being diagnosed with cancer, and it was the first with stand-in drummer Tommy Clufetos, making the split official between founding drummer Bill Ward and the rest of SABBATH.

Iommi, Osbourne and Butler discussed their new album in a video interview posted at NME.com. The three musicians are working with producer Rick Rubin on their first recording project together in 34 years, with Osbourne saying, “We’ve written about 15 songs so far. Whether they all get on the album, I don’t know. We just keep on writing.” Osbourne also dropped a clue about the set’s title, hinting, “Next year, 2013, is a good clue to what we’re going to call the album.”

As for how Rubin influenced the band’s approach to writing together again, Butler explained, “He sat us down, put the first album on and said ‘listen to this’, imagine it’s 1969, you’ve just done that, what would you do next?”

Iommi added, “It’s taken on the flavor of the old stuff in the way we put things together, but with a different look on it.”

The project suffered a blow earlier this year when Iommi was diagnosed with cancer, although he said that playing the warm-up show in Birmingham, was a boost to his spirits. “It was great,” he said. “Going through what I’ve gone through over the past year has been like living in a different world — being onstage and to get that (reaction from the fans) is just fantastic, it really boosts you up.”

BLACK SABBATH drummer Bill Ward announced earlier this year that he was declining to join his former bandmates for its scheduled 2012 dates, as well as the recording of a new album, due to a contractual dispute.

He also allegedly had his lawyers direct SABBATH to remove him from photos of the band posted at the official BLACK SABBATH web site “so as to not give the public the wrong impression about his involvement in the current BLACK SABBATH lineup,” according to a statement issued by the band’s publicist.

Geezer Butler issued a lengthy retort at his own web site, writing that Ward “hadn’t told any one of us he was having contractual problems, and frankly those things are worked out between our representatives, and never between the four of us let alone in public.”

Butler added that the band did not expect to make a lot of money from its Download appearance and planned to donate the proceeds from the Birmingham gig, saying, “Apparently, this wasn’t acceptable to Bill’s representatives, they wanted an amount that was so unrealistic that it seemed to have been a joke.”

In addition to Download, the members of SABBATH played at Lollapalooza in early August in Chicago, their only U.S. gig. The rest of the scheduled SABBATH tour dates were played by Ozzy and billed as “Ozzy & Friends.”