Hellfest has just announced some more bands for Hellfest 2013 through their official page on Facebook. Read the announcement below.

“As promised, here is the second announcement of 34 more bands, in addition to the first 50 names …

The new confirmed bands are : 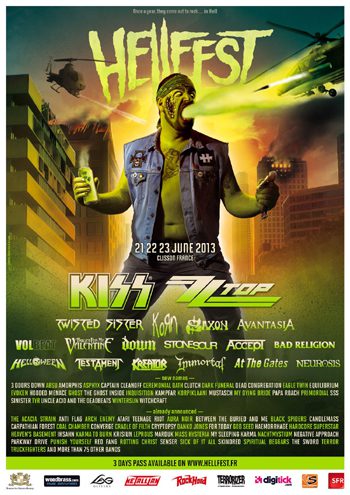 So that’s 84 bands (with previous announcement), but don’t forget, 75 news ones will be announced very soon, including some new headliners !!

We hope these new bands will help you to have great year’ s end celebrations.

The 3 days pass tickets will be available on the following websites www.hellfest.fr andwww.digitick.com until the next announcement in January.

However, the daily tickets will only be available on the classic network ,around next spring, with the final announcement. On this occasion we will present you the full running order details (bands, stage, days)

All the Hellfest productions crew wish you all the best for the end of 2012.

Meet us in January for a new killer announcement and the opening of the new hellfest website (www.hellfest.fr ). It should make your summer 2013 even shinier…”