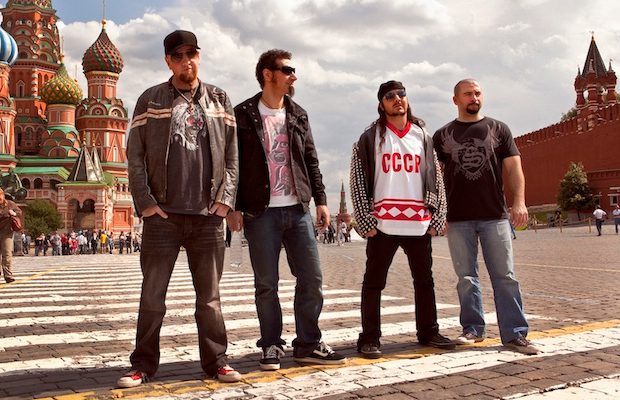 SYSTEM OF A DOWN has released the following statement:

“Earlier today (on May 20th), Shavo [Odadjian, SYSTEM OF A DOWN bassist] posted a few statements on his personal Facebook page that do not reflect the sentiments of SYSTEM OF A DOWN as a collective band. These were misleading statements that were made during a temporary state of bad judgment on his part alone. To be clear, the full band lineup of Serj[Tankian, vocals], Daron [Malakian, guitar/vocals], Shavo and John[Dolmayan, drums] will be performing all scheduled tour dates. With respect to new SOAD music, although we have not agreed on a timetable for a new album, we all believe that having the four of us do it together is the way to be true to the band and our fans.”

SYSTEM OF A DOWN last released new music in 2005 on the“Mezmerize” and “Hypnotize” albums, going on hiatus the following year.

The band reunited in 2011 for touring purposes and will spend the summer on a European festival circuit, while performing only one North American show in 2013 at California’s famed Hollywood Bowl.

In a series of postings on his Facebook page, Shavo wrote: “OK… I’ll come clean.. It’s not us (meaning Daron [Malakian, guitar/vocals], John[Dolmayan, drums] or Shavo!!) It’s Serj who doesn’t want to do a new album!!!! So please stop harassing us about it!!! We are just waiting forSerj! Now he might hate me for exposing the truth, but I had to..

“Sorry, folks!!! We’re trying to get a new album out, it’s just not passingSerj‘s rules! Kinda funny, since we started the band and now he’s holding us back!! I think we should should release another album again??? As for me.. I’m ready to release one with someone who wants to be the singer ofSYSTEM, not someone we have to beg to be a part of SYSTEM!!

“So with that in mind, what do you guys [think] we should do? Just remember, he’s been holding us back for seven years so far. Wanna wait another 4-5 years? Or shall we release a record without Serj? You tell us.

“I don’t want to make a record without him… but if he’s not down? Should the three of us just sit and wait?? Not cool!!!!!!!! I want the fans from all over the world, including Brazil, to tell us what they think. No SYSTEM? OrSYSTEM with with a new singer who’s just as good, if not better? PLUS new SYSTEM songs and tours???? Please give me your opinion, people!!! Is SYSTEM better with no singer or someone who is excited to be our new singer?? You decide.,. ’cause I’m confused!!!

“No diss to Serj. If he wants to be in the band, then he’s welcome, but if he’s not? What do you expect us three to do? We really want anotherSYSTEM record! Wish Serj was down, but if he’s not, then I’m going ahead and making a SYSTEM record without him!!! I’m furious that he let us down like this, but we gotta do something to keep this great band alive!!! Agreed?”

Tankian last year had a message for SYSTEM OF A DOWN fans waiting for a new album: don’t hold your breath. In an interview with Loudwire,Tankian explained, “We haven’t made plans of recording the new record as of yet. When we do, everyone will know. We haven’t really discussed another record as of now with any of the guys, really. It’s something that, when it’s the right time, we’ll do it. Right now I’m busy with my own stuff and that’s gonna take me a bit, but when it’s the right time, everyone will know. I don’t even want to say there’s [a new SYSTEM album] coming because we haven’t really talked about it.”

Although rumors have circulated for years about animosity within the band, drummer John Dolmayan told The Pulse Of Radio a while back that the members of SYSTEM are still friends. “I think a part of it is people like drama, you know. They look for it, and they want drama involved, they want SYSTEM to have problems. There’s a lot of haters out there, let’s face it, and as much as the fans really want the band to get together just so that they can see and enjoy the music again, there’s also just as many people that would like to see us not getting along and, you know, no hope of reuniting.”

Tankian told Loudwire that SYSTEM‘s recent tours have been a “blast,” adding, “I think we’ve played better because of it. There was new excitement in playing together and all of the shows have been really great. Everyone’s told us that we sound better than we did in 2006 when we left off, so I think it’s great.”