JAMES HETFIELD On Next METALLICA Album: ‘I Want It Done Yesterday’ 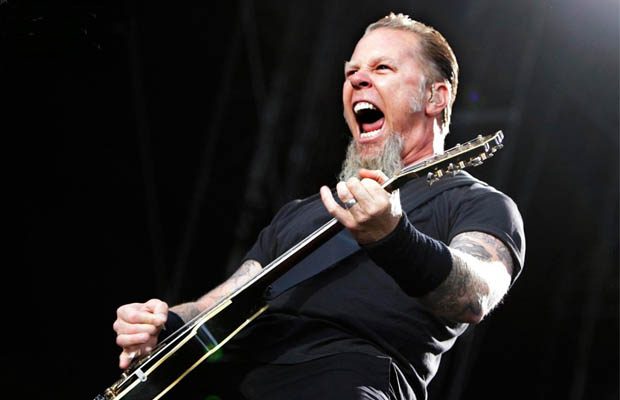 METALLICA guitarist/vocalist James Hetfield and bassist Robert Trujillo spoke to Billboard.com about the progress of the songwriting sessions for the band’s long-awaited follow-up to 2008’s “Death Magnetic”, tentatively due in 2015.

“I want it done yesterday,” Hetfield said, “and [METALLICA‘s second Orion Music + More festival] and [the upcoming 3D] movie [‘Through The Never’] is keeping us pretty busy at this point and it’s taking a lot of our time and effort. We’ve been touring some obscure places; I guess basically what we’re trying to do is pay for this movie, so the touring is keeping us from getting in there and finishing the record. Right now the focus is on the movie.”

He continued: “We got out into the room and jammed and we’ve come up with enough material for a record, for sure. We’ve gone through maybe one-tenth of the material that’s on our riffs CDs. We’ve got enough for an album, we just haven’t had enough time to really focus on it and dial in and start whittling it into these masterpieces, hopefully.”

Trujillo added that “the work ethic is super, super strong, and that’s what takes us longer than other bands, because we’re sitting there and sometimes we’re really analyzing things. I mean, for every one lyric,Hetfield has, like three lyric possibilities. But I can tell you this; the grooves and the riffs that are already on the radar are really, really awesome. We’ve still got more riffs to go through and jam out and throw into the process, but we’re getting there, and we’ll have something great, hopefully, in the next year.”

Last month, Hetfield told Abu Dhabi’s That’s Entertainment aboutMETALLICA‘s next CD: “We haven’t even started writing it. We’re going through riffs. We have, like, 800-and-something riffs we’re going through — lots of ideas. We’re really excited about it, but doing concerts here and there, trying to get back in the studio and get some stuff done, it’s all really exciting. But it gets done on METALLICA time, which is not really scheduled. When it’s done, it’s done and when it’s good, then it will be done.”

Asked in a new interview with Revolver about the next album, Ulrichsaid, “We’re in the early stages of writing, and all I can say is there are some good things lurking,” adding, “2014 is a bit optimistic for the album to come out, so ’15 is more realistic. But listen, there’s no rush. It’s gonna take what it takes. I don’t feel stressed about it, but that doesn’t mean we don’t care.”

METALLICA fans can next see the band headlining their own festival, Orion Music + More, on June 8-9 in Detroit, and then wait for the September 27 release of “Metallica Through The Never”, an IMAX 3D feature film that combines concert footage with a fictional narrative.