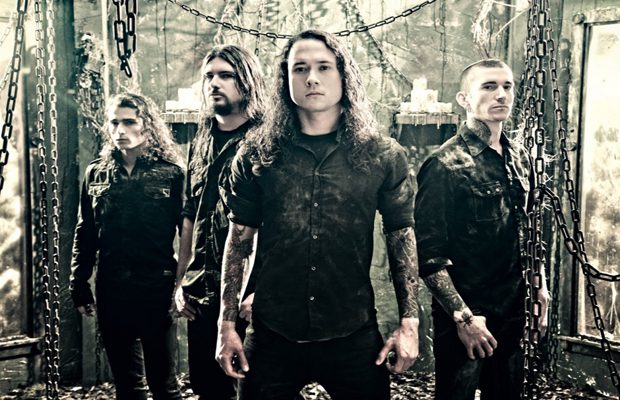 According to ThrashHits.com, Florida metallers TRIVIUM have set“Vengeance Falls” as the title of their recently completed sixth album, due late summer via Roadrunner Records. The CD was produced byDISTURBED/DEVICE frontman David Draiman at a studio in Austin, Texas and was mixed by Colin Richardson, who has previously worked with FEAR FACTORY, MACHINE HEAD, NAPALM DEATH, SLIPKNOT andBULLET FOR MY VALENTINE.

Speaking to Loudwire, Draiman explained how he came to be involved with the new TRIVIUM album. “We were talking about doing it for years,” he said. “The first time it really came up definitively was when TRIVIUMwas supporting DISTURBED on an Australian run — this was after the ‘In Waves’ record had been out already and I thought they had taken some pretty huge strides with that record, melodically and in terms of the strength of their songs. It was then that I had some conversations with them like, ‘You know, it would be a good idea for us to work together, because I think you guys have opened the door to something and you have incredible capabilities and I’d like to help you.’ We had more and more conversations over the course of time, and they came through Austin, Texas, one time while they were on tour and I played them some songs from the DEVICE record and we talked a little more about really figuring out how to set this in stone and put a time together and we did. They started sending me material and I started sending them comments on the material, and we started communicating in a pre-production sort of fashion, online at first, then over the phone and then in at the end of the second week of January they came out to my house here in Austin. It was basically two weeks of intense pre-production — 11 a.m. to 11 p.m., six days a week — then about a month or so of tracking. Once we had finalized everything, we executed it rather quickly but there was a lot of work and prep involved. These guys learned a lot and grew a lot and has made a record that is going to be a defining moment in their career.”

In a recent interview with RoadrunnerRecords.com, TRIVIUMguitarist/vocalist Matt Heafy stated about working with Draiman: “He was the most hands-on producer we’ve ever worked with. And we’ve worked with some amazing people … We looked at it as a partnership, as all of us working together to make the best songs possible. And withDavid, he had input on everything. What was amazing was he never wanted to cross the line — he never wanted to change who we were. That was a big thing he said early on: ‘I want this to still very much beTRIVIUM, but we’re gonna take it to the next level.’ He had things from — not lyrical changes, but lyrical suggestions — ways to help further the point of what the song was. That was something I’d never had before; I’d never had a producer say, ‘What are you saying in this song?’ And when he first asked me that, I gave him the same answer I was giving for interviews for all of ‘In Waves’, which is, ‘Well, this is interpretable,’ and he was like, ‘Yeah, yeah, that’s fine,’ but he felt like it should go this way or that way, and I’ve never had that before, someone who was able to help me look at what the point of the song was and help me narrow down the message I was trying to convey. We worked on vocals – he helped me gain another four to six notes in my upper vocal range, which is something I never thought was possible … He helped with every instrument, every song, helping create melodies — his ability to create melody is one of the most staggering things I’ve ever seen. If someone can picture in their head a virtuoso guitar player stepping up to play a song and improvising right on the spot, something really technical and really flashy, well, Davidcan hear a song or a chord progression or a bass melody one time, and after hearing it once, he can come up with amazing melodies to go on top of it, and each time he works with it, within two minutes of hearing it for the first time, he can create incredible hooks on top of it. I’ve never seen that before. It was mind-blowing to see his ability for melody construction on the spot.”

Pictured below: TRIVIUM at studio in Austin with David Draiman