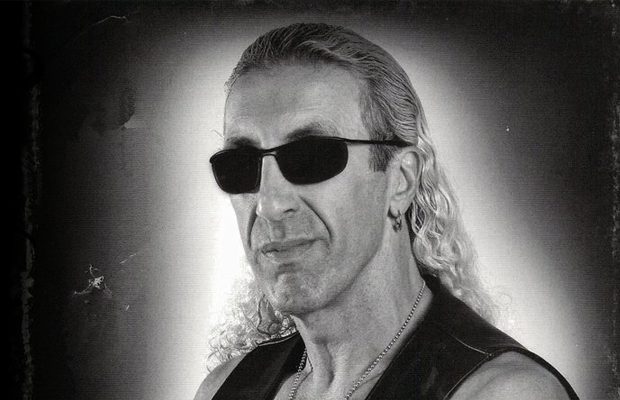 “[Jay Jay is] very crazy about protecting the trademark, and he sues everybody,” Snider told KCTV.

He added: “People are going crazy because it seems like this Goliath is attacking this David, this poor little David for the TWISTED SISTERtrademark. I told JJ, I said, ‘You know, man, you’ve got to call in to some of these TV shows and some of these radio shows and defend yourself.’ Because he apparently tried to work something out with the people at that shop and their first response was, ‘Who’s TWISTED SISTER?’ They actually said they’d never heard of the band. Really? Really? That much I know. Everybody’s heard of TWISTED SISTER… For better or for worse, it’s a household word.”

Sandi Russell, who along with her sister, Nancy Hansen, are the sisters operating the Mission shop, told the Prairie Village Post that the name for her store, which started in August 2012, is a reference to a family label given to the sisters by their late brother back in the 1960s. He also used to call Nancy the “blond tornado,” so Twisted Sisters and the logo, which looks like a tornado sketch are rooted in family and their Kansas location.

According to KCTV, Russell wrote back French‘s attorneys on May 8 that she hadn’t heard of TWISTED SISTER before receiving the letter.

“Quite honestly, when I first received your letter, I truly had to go to the site you provided to learn of this band. Sorry. After Elvis, THE BEATLESand the BEACH BOYS, my love of music tends to be country,” she wrote.

“All of the references to twisted, twisters and tornadoes come out of where we live, Middle America, Tornado Alley, home of Dorothy andTOTO.

“Honestly, we are a 1000-square-foot coffee shop in Middle America, painted with HGTV paint colors playing classical music,” she said. “I would hope our sense of family, honesty and community would be Twisted Sisters Coffee Shop legacy along with being a friendly, comfortable place to come and enjoy a great cup of coffee with friends and family.”

Back in November 2012, French released a statement explaining that he was forced to send a cease-and-desist letter to the owners of theTwisted Sister House Of Hunger food truck in Minneapolis, Minnesota asking the business to change its name because he and his bandmates are required by trademark law to either defend their trademark or lose rights to it.

In the cease-and-desist letter, which was sent last October, French and his attorney wrote, “It is the opinion of our client, with which we concur, that your use of the name Twisted Sister will cause dilution of our client’s famous mark and will cause confusion among consumers.”

Addressing criticism from fans and other observers regarding TWISTED SISTER‘s decision to initiate the name dispute, French said, “I get how stories like these appear like David vs. Goliath. I also get how easy it is to take cheap shots at my band because of our former image and the ’80s-era MTV iconography.

“The fact of the matter is that trademark law doesn’t give me a choice on who and what to defend. The law is very clear: either defend your trademark or lose rights to it.

“Over the last 35 years, I have defended my trademark against the biggest companies (Six Flags, Urban Decay, Harley-Davidson) as well as dozens of mom and pop companies. The defense is almost always the same. They first claim that they never heard of the band and then they say that no one would confuse the two anyway. I have won every case. The unique juxtaposition of the words ‘Twisted’ and ‘Sister’ have never ever appeared in print prior to my band’s use of it. This was established in the Six Flags case. The name is so unique, like LED ZEPPELIN, that any use would confuse the marketplace as either the product or service is owned or endorsed by us.

“Also, if I let one go, that just emboldens someone else with the rationale that ‘you didn’t bother them, so why go after me.’ I have heard this many times before.

“When my band first started, we thought of calling ourselves ‘THE MAX FACTOR.’ it was a cute idea because we were a ‘glam band.’ My lawyer at the time then said to me: ‘This is a bad idea for two reasons, 1. You will probably be sued for trademark violation and 2. Why would you want to trade on someone else’s idea? Think of something original and unique, that way, should you succeed you will be able to take credit for your own special creation.’

“I really don’t understand why people feel the need to steal someone else’s property. Perhaps they are just lazy. I think that the real reason they used our name and didn’t call it The Beatles, Rolling Stones or Motley Crue House Of Hunger is that they knew that they would get sued and perhaps thought that we wouldn’t notice.

“I believe in the American way of ‘roll up your shirt sleeves’ entrepreneurship. Be proud of your hard work and ingenuity. Be proud of being unique. Provide a service like we did that people love. I also hope these guys give back to the community like we do as we support various charities such as: The Ocular Immunology And Uveitis Foundation(uveitis is the leading cause of blindness among teenage girls in the U.S. — my daughter suffers from it), March Of Dimes Bikers For Babiesmotorcycle runs, Fallen Blue, Cure Autism Now, the USO (we toured Korea for our troops following the start of the Iraq war), the widows and orphan fund for the NYC EMS workers killed during 9/11 as well as every year providing dozens of signed guitars, CDs, and posters for auctions to raise hundreds of thousands of dollars to many other causes.

“In 2013, I will be celebrating 40 years of hard work and dedication. We now headline in 33 countries and have played over 9,000 performances.

“I only wish for these guys to have this kind of success where you start from nothing, zero, against all odds and have a real career. Just please do it on your own terms, with your own ideas, providing a great product or service, just don’t steal from others. That is not the American way.

“One last thing. If the food truck still wants to use our name as part of their business (because they can’t think of anything more original) and legally license it from me, 100% of the licensing money will go to the OUIF(Ocular Immunology And Uveitis Foundation).

“As you can see, I am proud of what we have created. We have learned that being original, true to yourself, working hard and giving back pays off in ways that one can’t even imagine.”