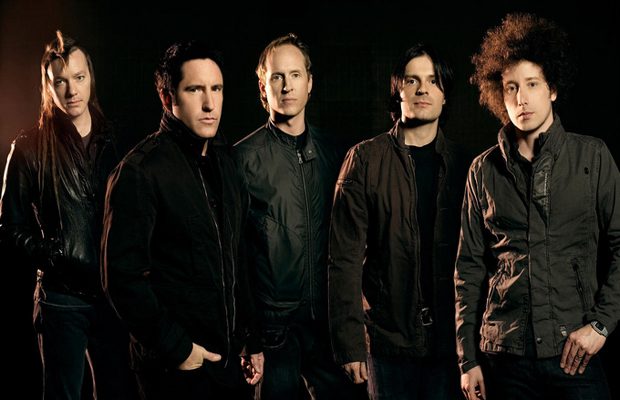 Belew wrote on Facebook: “Hey, folks, before this goes too far, let me say this: I greatly respect [NINE INCH NAILS mainman] Trent [Reznor] and the music he makes. No one is at fault. We both agreed it just was not working. I’m sorry to disappoint anyone. That really hurts. But NIN will do an amazing show and I am back where I belong: creating FLUX.”

Bassist Eric Avery quit NINE INCH NAILS last month, writing onFacebook that he was “overwhelmed” at the thought of going out again with NIN after spending the last year on tour with GARBAGE.

NINE INCH NAILS will release its first new album in four years, titled“Hesitation Marks”, on September 3 through Columbia Records. The disc was recorded in secret over the past 12 months and features “Came Back Haunted”, the first single, which is available at iTunes on Thursday (June 6). In addition, the band has confirmed a lengthy North American tour called “Nine Inch Nails: Tension 2013” for the fall, beginning on September 28 in St. Paul, Minnesota. Tickets for the arena outing will go on sale to the public beginning Friday, June 14 at LiveNation.com.

Reznor said about the tour, “‘Tension’ picks up where (2009 outing)‘Lights In The Sky’ left off. This is the full-on NIN live experience realized as we never could before.”

Fans who pre-order “Hesitation Marks” on iTunes will instantly receive a download of “Came Back Haunted”. The single is also streaming at the official NIN web site.

Before the tour, NINE INCH NAILS will appear this summer at events likeLollapalooza, Outside Lands, Leeds, Reading, Made In America and the Voodoo Festival.