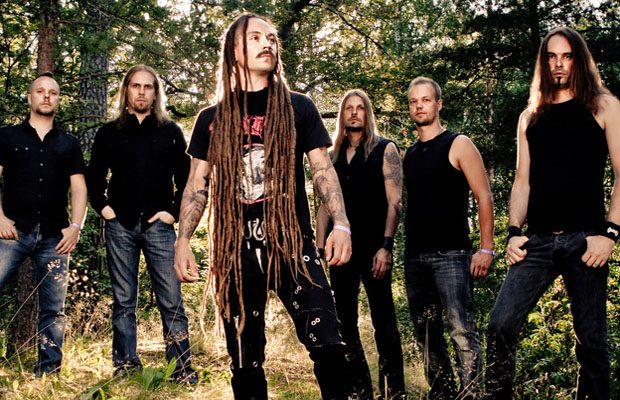 “The Wanderer”, the new video from Finnish melancholic dark metal forerunners AMORPHIS, can be seen below. The clip was directed byPatric Ullaeus of Revolver Film Company, who has previously worked with DIMMU BORGIR, LACUNA COIL, IN FLAMES, SONIC SYNDICATEand KAMELOT, among others.

Commented the band: “We’ve had super fun shooting this new video withPatric Ullaeus who did an amazing job, as always! For us, it’s one of our favorite music videos from all the ones we’ve done so far!”

“The Wanderer” comes off AMORPHIS‘ eleventh album, “Circle”, which was released on April 19 via Nuclear Blast Records. Production and mixing duties for the follow-up to 2011’s “The Beginning Of Times” were handled by HYPOCRISY and PAIN mastermind Peter Tägtgren, who has previously worked with such bands as CHILDREN OF BODOM, CELTIC FROST, IMMORTAL and DIMMU BORGIR. The recordings took place atPetrax Studio (NIGHTWISH, CHILDREN OF BODOM, KORPIKLAANI) in Hollola and 5K Studios in Helsinki. The cover artwork was created by Tom Bates (BLEED FROM WITHIN, DEVIL SOLD HIS SOUL) and can be seen below.

Commented AMORPHIS vocalist Tomi Joutsen: “The mystic, androgynous person on the cover represents a spiritual guide. This character was sent from another time and place to help the album’s protagonist find a new path for his life.”

The album’s limited digibook version comes with a bonus DVD containing the following:

Apart from the CD+DVD digibook version, “Circle” was made available on CD (without the bonus track), black 2LP in gatefold, brown 2LP in gatefold and as a bulging limited box, including three bonus tracks and a wristband — exclusively via the Nuclear Blast mail order.