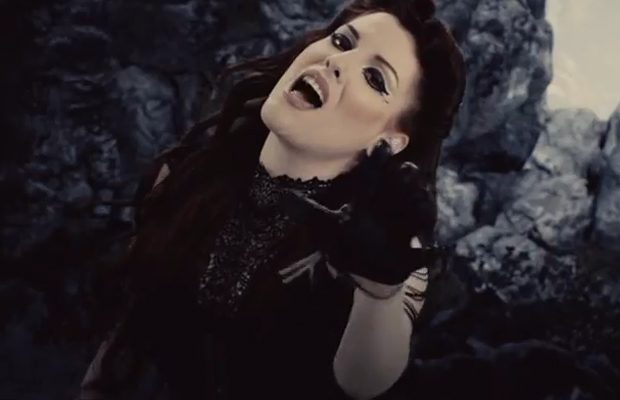 The official lyric video for the song “My Destiny Coming To Pass” from Norwegian/Spanish symphonic gothic metallers SIRENIA, can be seen below. The track comes off the band’s sixth studio album, “Perils Of The Deep Blue”, which will be released on June 28 via Nuclear Blast Records. The CD was produced by SIRENIA mainman Morten Veland, while the mixing and mastering was handled by Endre Kirkesola at Dub Studios in Oslo.

“The writing process has been going on for about two years,” statedVeland. “I always have ideas for new stuff, so I started writing even before we had released our previous album, ‘The Enigma Of Life’. Most of it has been recorded in my own studio. I love to work there as I always feel inspired — plus we can take our time with whatever we do, for there is no time pressure. Just like for all of our previous albums, we also dropped by Sound Suite Studios in France — a great place that feels like home, too. This time we recorded the Marseille choir there that one can always hear on our records, as well as some of my acoustic guitar parts.”

The album artwork was originally painted by Anne Stokes — though it wasn’t intentionally created to be used as such, as Morten explained: “came across the artwork on the Internet and immediately fell in love with it for obvious reasons — it’s no secret that I’ve always been fascinated by Greek mythology and sirens. So we got in touch with Anne and luckily she granted us the permits to use it for the record. I actually drew the inspiration for the album title, ‘Perils Of The Deep Blue’, from the artwork. In my opinion, it’s the perfect SIRENIA cover — there was no way we could have let that opportunity slip away!”

SIRENIA‘s last album, “The Enigma Of Life”, was released on January 21, 2011 via Nuclear Blast Records.

In 2008, SIRENIA recruited singer Ailyn (born: Pilar Giménez García) as the replacement for Monika Pedersen, who left the group a year earlier after only one album due to “musical differences.”

Ailyn was best known as a former contestant on the Spanish version of“The X Factor”, the biggest television talent competition in Europe.