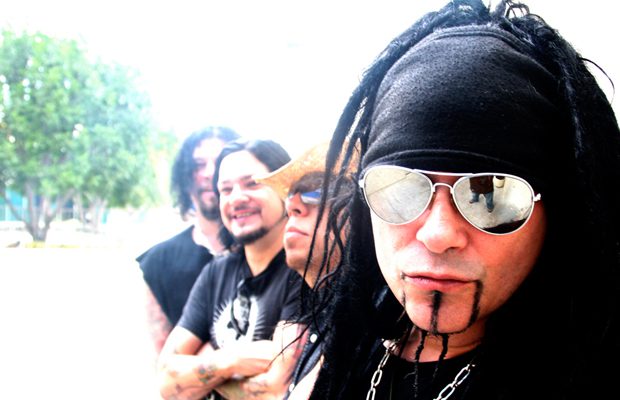 Metal Forces has exclusively published an extract from the newly released book “Ministry: The Lost Gospels According to Al Jourgensen”, written by MINISTRY mainman Al Jourgensen with Jon Wiederhorn and published through Da Capo Press. A portion of the extract is reprinted below.

“You know you’re in trouble when you try to say goodbye to your wife and all you can do is gargle blood. I was dying. Well, that was nothing new. I’d tempted fate for more than four decades. I’ve had kidney failure; liver failure; hepatitis A, B, and C; and I tried to invent D, but all the doctors I saw were too dumb to grasp my creativity. I lost a toe, all my teeth, and nearly an arm, and I’d overdosed on heroin twice and had to be resuscitated.

“That’s how I was supposed to go out, like a rock-star cliché with a needle in my arm and a groupie on my dick. But that wasn’t happening. See, I’ve always done things back-assward. I became a singer even though I hated singing, sold out to a major record label before anyone even knew who I was, and then wrote slow, desperate, crushing music when everyone wanted to hear fast thrashy stuff.

“So there I was, bleeding to death from a goddamn ruptured ulcer. Turned out I’d had ulcers for years without knowing it. I mean, what the fuck? I’d always thought ulcers were the kind of thing that neurotic old ladies got and then they took some medicine and got better. Like I said, back-assward. In retrospect the whole thing is a blur, and I don’t remember much except sitting on the toilet and blood pouring out of my asshole, falling off the toilet, puking pints of blood, and trying to crawl across the floor. Then I was in an ambulance.

“March 27, 2010 — the 13th Planet Compound Massacre. Everyone tells me that’s what it looked like. I was passed out for most of it.

“Here’s what I do remember combined with what Angie (Jourgensen, wife) and Sammy (D’Ambruoso, engineer) told me later. I was lying on the couch with my helmet on, feeling pretty crappy, and suddenly I desperately had to take a shit. I stumbled to the toilet, dropped my pants, and sat down. Only I didn’t shit. All that came out of me was blood, and there was so much pouring out of my dick and my asshole that I started to panic. I didn’t want the toilet to overflow, so I took off the helmet, held it to my ass and let the blood pour in there. Then I had a major seizure because I had lost so much blood. I fell off the toilet and tried to put the helmet back on, and about 12 ounces of blood matted down my hair and ran down my face, pooling with the blood that was dribbling out of my mouth and nose. That’s where Sammy found me an hour later and went to get Angie. It looked like the aftermath of a murder scene. There was blood on the floor, all over the toilet, and running across the tile floor. I was having massive seizures and I was blue. Angie called 911.”