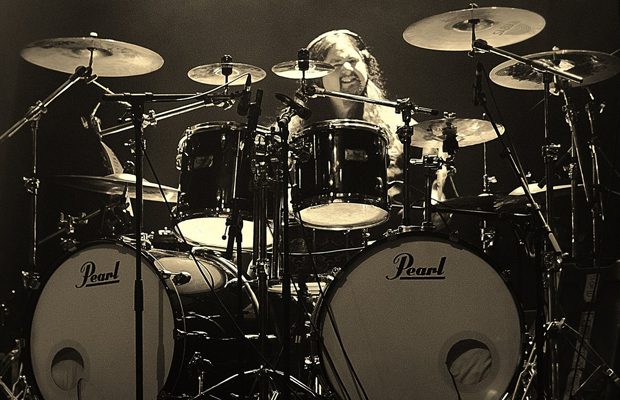 In a recent interview with Metal Assault, Gene stated about what fans can expect to see on the forthcoming disc: “Well, I managed to get licenses to a lot of songs that I’ve played. We put together a small track listing of me playing along to the actual recorded versions of a lot of people’s favorite tunes.

“On the next one, I’m getting even more licenses, but on this one I’ve included a bunch of bands that I’ve played for and still playing for. That’s the notable difference.

“On the first “The Atomic Clock”, I didn’t get any licenses so I merely played to the bandMECHANISM, which at the time was my main focus. I even played two instrumental tracks ofMECHANISM as opposed to playing the whole song. This time I’m not playing instrumental tracks except for one from one of my more popular bands, but I’ve got all the basic instrumental backing tracks and I’m playing along to those as opposed to having all the vocals, samples and everything else on it. For the most part, that’s a major difference and that’s really exciting, seeing myself play to actual recorded tracks to some of these cool bands.

“It’s in the stages of editing right now. It’s coming along great; it looks better than the last one and way more pro. It’s an improved version of the last one. I’m still pretty light-hearted in it and I don’t take myself real seriously. It’s got a lot of footage that the last one didn’t have. So I’m sure people checking it out will see that it’s definitely a departure from the first one. That was done on a shoe-string budget, pretty much all by myself, but for this one I’ve got a team of experts helping me with it.”

Earlier this week, Gene announced a few of the tracks that will be included on the DVD:

The jam-packed DVD is available for pre-sale now, with several awesome package options.

Hoglan is heralded and is inspirational to many, even outside of his drumming and now celebrates a 30-year career in music as metal’s in-demand legendary drummer. Gene is the only metal drummer to accomplish two No. 1 records on the rock charts in 2012 withTESTAMENT‘s “Dark Roots Of Earth” and DETHKLOK‘s “Dethalbum III”.

Hoglan came up with this concept to give the fans what they want: the ultimate “Gene” experience. In addition to telling personal stories, as mentioned above, Hoglan will reveal some of his secret techniques and tips to help all drummers and musicians of all levels.

You get to meet Hoglan and have access to his exclusive merchandise from Gene himself.