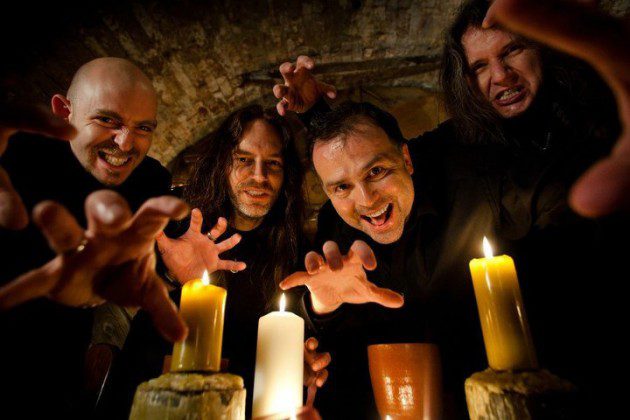 “I am sure no one expected me to be back with news about a band called BLIND GUARDIANso quickly. The reason is quite simple: I’m a workaholic and I have no idea what to do with all my remaining energy at the moment. Therefore I have decided to spend some time with thoughts about BLIND GUARDIAN‘s future plans.

“Here is my remarkable output…

“Like the majority of you, I was also very surprised when our show in Geiselwind was announced for May 2014. I suppose that I, or one of the other guys, have agreed to this show. I’ll probably never figure out who did it, but that’s not important now, the show itself is of importance.

“To be honest, all of us cannot wait to get back on stage. Our stage abstinence seems much longer to us than ‘just’ 2 years.

“Since we were asked to do a ‘best-of’ show we do not even have to rehearse, this is more or less the type of show we have done in the past anyway. I still hope we can put in some surprises since no one really knows what we consider our ‘best-of’ songs at the moment. It
might differ from ‘Memories Of A Time To Come’ though. Right now I’m working on a possible set list and I’ll cross my fingers that this will be approved when the others have a look at it.

“By announcing this live appearance, we also secretly announced the intended termination of our album production for the end of May. We obviously have progressed quickly, in BLIND GUARDIAN terms, that is. Indeed, everything looks very promising with regards to our songwriting and our production. We have good reasons to believe that the album is going to be completely finished at that point. Let’s hope I will not be proven to be the reincarnation of good old Münchhausen again. Anyway, even the worst-case scenario would have us not being too far away from completion at that point.

“Since we have already completed several production steps on the new album, the picture gets clearer and clearer. Although not necessarily clear enough to decide whether I’ll go lyrically for individual topics on each separate song or instead for a conceptual album. On one hand, the concept would have a strong fantasy link and on the other hand it would contain some typical Dystopian elements, because this is also what I musically find in most of the songs. They will all feature an almost magical grandeur but will present some very harsh disturbing elements as well. Therefore such a concept might be very suitable. I will have to sleep on it for a while until I’m able to make a decision.

“Whenever we start songwriting, I try to create a plan in my mind detailing which qualities I would love to feature on the next BLIND GUARDIAN album and what general impression I would like to create. Very often at the end, things come out quite different and I’m surprised which qualities or preferences have shown up then. This time there seems to be a collective urge (without even having talked about it) among all members to feature the more aggressive side of BLIND GUARDIAN this time.

“Right now, we are working on 5 faster songs. As far as I remember, last time I have mentioned‘Encrypted Time’ and ‘Holy Grail’ (which are both proceeding well in the album production), so I am going tell you a little bit about ‘Winter’s Coming’, ‘Outcast’ and ‘Song 9’. The first one is based on Marcus‘ [Siepen, guitar] idea of a ’90s-orientated speed/thrash song. We have finished a good two thirds of this one. It’s fast and heavy, or was it heavy and fast? I have no idea how he came up with the title ‘Winter’s Coming’ — how true, how true. ‘Song 9’ is a fresh one which used to be a collection of parts at first, but then developed into something very special. I would describe it as a refreshing combat between ‘Guardian Of The Blind’, ‘The Script For My Requiem’ and ‘Ride Into Obsession’, only disturbed by a fairly straightforward chorus. If you ask me, this one is born to become a ‘classic, but first underrated by the band’ song. My favorite among the fast ones certainly would be ‘Outcast’. A song full of surprises. The old-school die hard fan will probably complain later that this one has a soft intro (epic and sad), but even this person would have to agree that afterwards we keep up the speed on this one to the very end. The song is a roller coaster ride through the last three decades of metal. I love it!

“As for the epic tracks, I love ‘Irish Hills’ the most. I have decided to entitle this ‘Grand Parade’ as ‘Irish Hills’ never really fit the song. Imagine a mixture of ‘Wheel Of Time’ and‘Nightfall’ and you might be there. We have a beautiful orchestration for this. This one certainly demands a lot of time during production simply because there really is a massive amount of elements in it. Not as much as in ‘And Then There Was Silence’, but a lot…

“‘Midtempo Song’ is the most ‘commercial’ song on the album so far. ‘Commercial’ in a positive way, of course. It would deserve a title like ‘Irish Hills’ more than ‘Grand Parade’ did when it was called ‘Irish Hills’, but who said that life is always fair… To give justice to the song, I also have to say that it is very progressive but also very catchy. ‘The Throne’ is another epic piece we are working on. I have just started working on vocals for this one last Friday. It is too early for me to describe this one more precisely. What I can say is that this one is the perfect link between ‘Grand Parade’ and ‘The Ocean’. This last one is already completely recorded except for the vocals. ‘Prophecies’ and ‘Encrypted Time’ are completely recorded and the same can be said about some older B-songs, which we have decided to finalize with this session as well. The BLIND GUARDIAN pundit knows about which songs I am talking.

“The songwriting period is almost finished by now and the final production session is going to start next week and will keep us busy until Geiselwind. As I think about that, I better stop thinking and start songwriting instead.”