PAUL BOSTAPH: SLAYER Is Honoring JEFF HANNEMAN By Continuing Without Him 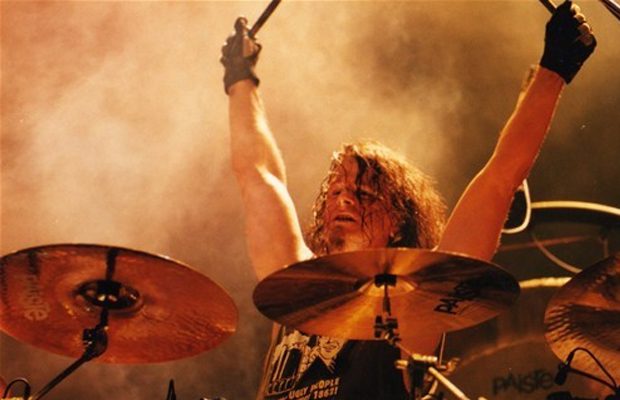 Earlier this week, Dimitris Kontogeorgakos of Greece’s Metal Kaoz conducted an interview with SLAYER drummer Paul Bostaph. You can now listen to the chat using the audio player below. A couple of excerpts follow (transcribed by BLABBERMOUTH.NET).

On how it feels playing with SLAYER again:

Bostaph: “It feels phenomenal. It feels really good. It feels like being home. I’ve always loved playing this music. I grew up on it… Just coming back to this, it’s been really good. It’s kind of like going back and playing with old friends again. I mean, Kerry [King, guitar] and I were really close and we still are, and I’m close to Tom [Araya, bass/vocals]. And I know Gary [Holt] from EXODUS [who is filling in for late SLAYER guitarist Jeff Hanneman] — I know Gary very well. The only bittersweet part of it, obviously, is that Jeff is not with us anymore. And I was looking forward to that, to playing with him again. But other than that, other than Jeff passing, it’s been really good.”

On his decision in December 2001 to leave SLAYER and how things are different today:

Bostaph: “Well, it’s funny… I was different back then. The way I looked at things was different — right or wrong. And now I’ve had the time to kind of… Sometimes they say you don’t know what you have until it’s gone. And I think over the years, just seeing the guys and playing with different bands [since I left SLAYER], I kind of realized that playing with these guys is that there’s a way that they do things that… In terms of… I don’t know… It’s hard to explain. There’s a work ethic that appeals to me within this band. I think there’s just a feeling of loving the music. First and foremost, and the primary thing out of everything, I couldn’t find a band that could do what this band does. And that’s the bottom line, really.”

On whether he was the first and only name on SLAYER‘s list of possible replacements for the band’s original drummer, Dave Lombardo, when Dave parted ways with SLAYER earlier this year:

Bostaph: “Honestly, I don’t think so; I don’t think I was the first and only [name on the list]. I mean, there’s probably some other guys [that were being considered as well]. But I’m the guy that’s here now. It made sense [for me to return]. I mean, you can’t think anything for granted and think it’s just gonna work. You have to try it out and see how things feel. It’s been over [ten] years [since I left the band], and I’m sure they wanted to see how it felt playing together again, and being in a room together, you know what I mean?! You just don’t make a snap judgment like that and [assume] that it’s going to work. And they didn’t. And we got together and we felt it out, and it felt really good, and here we are.”

On how different it feels being in SLAYER without Jeff:

Bostaph: “It still hasn’t completely sunk in yet. There are times when I look over to Jeff‘s side of the stage, where he used to be on, and I still miss him. It happened so quickly that… The bottom line is Jeff‘s always gonna be here; there’s never gonna be a time when I’m not gonna think of Jeff. That’s impossible. Other than him being my friend, even on stage, I had really good chemistry with him… It’s gonna be impossible. It’s impossible to forget him. I know I never will, and I know everybody in this band won’t either. And like I said, it’s a bittersweet experience. It’s nice to be back in the band, but it’s not nice having Jeff not around.”

On whether SLAYER‘s current tour is meant to bring “closure” to the band before they call it a day:

Bostaph: “I don’t believe that at all. I guess the best way to put it… And I’ve heard all the fans say… Not all the fans, but just some of them… It’s not every fan that’s saying it’s over; it’s some fans. And everybody’s got their opinion. And I respect that. But the way I look at it is this… There’s two ways to look at it. The fans that are saying that aren’t in this band; they love the band, but they’re not in this band. The thing about it is, if you’re in this band, what do you do? You just quit? Every single one of us has put over 40 years into music and worked really hard and gone through a lot of crap to get to this point. You just don’t look at your career and just pack it in. And I also don’t believe Jeff wanted this band to end. No, he didn’t. And the bottom line is: what do we do? Do we honor what the band is by just packing it in and quitting — which I feel is weak — or do we push on and do what this band is supposed to be doing? ‘Cause I know this: there’s more fans that would be happy if this band stayed together than there would be fans that don’t want this band to be together. There’s still life left in this band. The bottom line is, it’s up to Kerry and Tom. I’m here; I want this to continue. I, personally, myself, I wouldn’t be honoring Jeff by saying, ‘We’re done.’ That’s not honoring him. That’s not how I feel about it. I feel when we go out on stage from now on, we’re honoring him and we’re honoring what SLAYER is. And even though Dave is not here, I’m honoring him as well. I was the drummer in this band for ten years, and Dave came back. And now Dave‘s not here and I am. It’s one of those things. I respect him and I respect his playing. He’s part of this legacy; he helped build it. So did Jeff. And in turn, I understand what the fans are saying about that — well, some of them anyway — but the other side of things… If that was me, from a fan’s perspective — and I’ve been a fan of this band — I wouldn’t wanna not hear ‘Raining Blood’ [performed by SLAYER one more] time, you know what I mean?! You can get your cover bands play it for the rest of your life. I don’t feel good about that.”

On the status of the next SLAYER album:

Bostaph: “Well, right now, Kerry and I have… We were working… Kerry, he’s been writing for quite some time now. We have over 11 songs demoed for the new record. So I think it’s a matter of… You’re asking the wrong guy when [the new album will be recorded], but there’s a lot of material for a new record already in the pipeline. It’s really a matter of when we decide to pull the trigger and say, ‘Let’s just go.’ To a certain extent, looking at this again, and I don’t wanna hammer the Jeff thing too much, but you just don’t lose one of your bandmembers like Jeff and then just jump into the studio and do a record.”

On whether there is any material left over from Jeff that might be used on the upcoming album:

Bostaph: “I believe there’s a couple of things that are left over from the sessions from the last record. I haven’t heard any of it yet. Tom and Kerry are trying to figure out what they’re gonna do with it. I’m not sure at this point what’s gonna happen with it yet. Like I said, I don’t know how much of it there is. I think there’s a couple of songs, but I don’t know what’s gonna happen with it. There’s been talk about trying to record it, but that’s all I know at this point.”