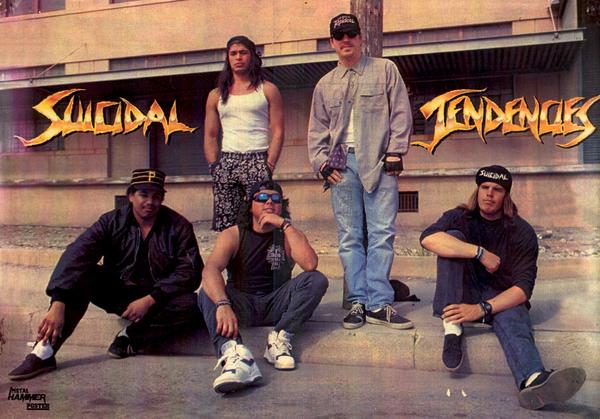 A teaser for “Smash It!”, the new video from the long-running Venice Beach, California thrash/punk band SUICIDAL TENDENCIES, can be seen below. The band was joined during the shoot by the the Metal Mulisha freestyle motocross team.

“Smash It!” comes off SUICIDAL TENDENCIES‘ new album, “13”, which sold around 3,200 copies in the United States in its first week of release to debut at position No. 187 on The Billboard 200 chart. The first studio album in 13 years from SUICIDAL TENDENCIES was produced by vocalist Mike Muir and Grammy-nominated engineer/mixer Paul Northfield (DREAM THEATER, HOLE, RUSH).

In a recent interview with Jersey Beat, Muir stated about “13”: “We just wanted to have a record which felt like going back through a time machine, that if I was playing straight through at 15, I would go, Whoa!’ We didn’t want to make a record which sounded old, but one that people not even 20 years old hearing even 20 years from now at would say, ‘Wow, that’s a great record.’ A lot of people, the first thing that they ask is: ‘Well, what style is it? Is it punk, is it metal?’ and we’re just, like, ‘Why do you want to categorize something so quickly, not care only if it’s good?’ That takes time, but I do think that there are a lot of people who are going to love it for the right reasons.”

Asked why now was the right time for SUICIDAL TENDENCIES to release a new studio album, Muir told Grammy.com: “We’ve been touring at least a couple of months [per year] for the last six years, and among other things I had a couple of back surgeries. We didn’t want to put out a record afterwards and make it look like we were throwing out our last baseball, the athlete going for the last hurrah before he falls apart. We wanted to get out there and gain a little new ground.

“Our [fan] base is pretty strong. Obviously, a record helps out a lot, and on this tour we’re seeing a lot of people excited to come, not to be nostalgic but as more of a resurgence. We’ve got a lot of families coming. A lot of people saying that their first show they saw was 20 years ago, and they’re bringing their kids there for their first show. We never used to hear that before. At our first show in San Francisco, this girl came up and asked us to sign something for her mom. Then she said, ‘I love you too, but my mom’s loved you longer!’ We were all laughing.”