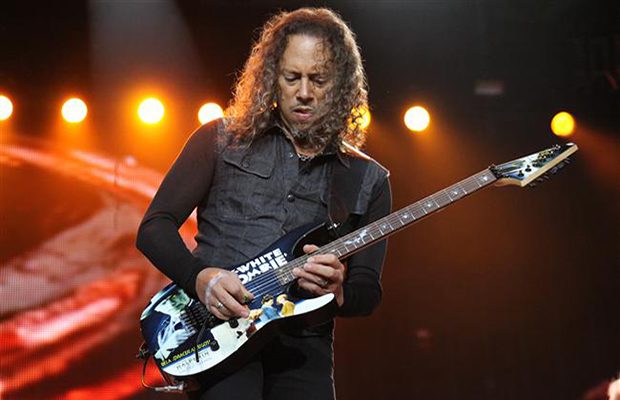 Lifelong horror enthusiast and METALLICA guitarist Kirk Hammettrecently spoke to Nikki Blakk of the San Francisco, California radio station 107.7 The Bone about his first annual horror convention, dubbed Kirk Von Hammett’s Fear FestEviL, which will take place February 6-8, 2014 at The Regency Ballroom in San Francisco, California. You can now watch the chat below.

Created to honor the weird, the wonderful, the eclectic, and the things that make your hair stand up on end, the heavy doors of collector/curator/historian/guardian Kirk Von Hammett‘s crypt will be opened to the public to display the finest acquisitions in his extensive collection of horror memorabilia which includes rare movie posters and props, costumes, models, masks, and toys from various eras.

“I’ve always loved horror, I’ve always loved collecting, I’ve always loved weird and macabre things and I’ve always loved conventions,” confessed Hammett. “So what could be better than having your own Fear FestEviL where ALL those great and crazy things can be enjoyed by like-minded people under one pretty cool roof?! Nothing!!! And because I’ve seen some conventions turn from back-room gatherings of like-minded dorks into mainstream hipster extravaganzas, rest assured that it’s my intention to make this a great experience where all things horror, weird, and nerdy are celebrated! So come one and all!!!”

Already confirmed to attend as panelists will be Slash, makeup FX legend Greg Nicotero (“The Walking Dead”), Tom Savini (“Dawn Of The Dead”), and John A. Russo (“Night Of The Living Dead”).

In 2012, Hammett released “Too Much Horror Business – The Kirk Hammett Collection”, an oversized 228-page hardback book documenting his love of all things related to the horror genre and features more than 300 photos of items from the collection of horror memorabilia he has accumulated over the years. The book also included three lengthy interviews withHammett, who also wrote the captions for many of the photos.

Hammett told the San Francisco Chronicle, “I’ve been into [horror] stuff since I was five years old . . . My love for this stuff is insane and totally obsessive-compulsive. It’s just one of those things. I’m still waiting to outgrow it or get tired of it or get bored with it. But it does not seem to happen.”

Hammett added, “I’ve always been attracted to the darker things in life. I was never one to go for light, airy stuff, even as a child. My whole aesthetic has always been one of the darker side. That rings true also in my tastes in music.”

Hammett has hosted Kirk’s Crypt, a haunted house stocked with posters, film props, vintage comics and custom guitars, at the first two installments of the Orion Music + More festival, a music and lifestyle festival created by METALLICA and their friends at C3 Presents.