VINCE NEIL: MÖTLEY CRÜE’s Decision To Embark On Farewell Tour Has Nothing To Do With MICK MARS’ Health 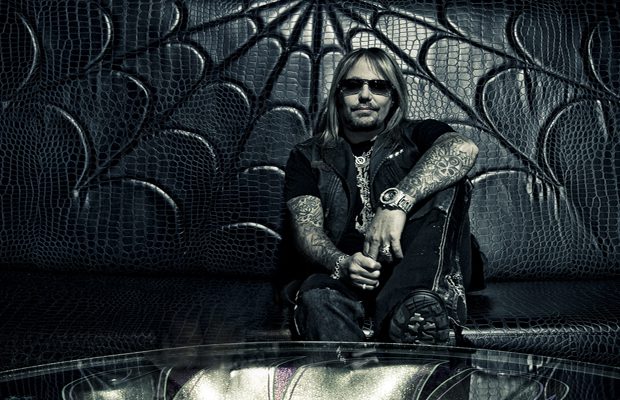 Sally Steele, publisher of Vegas Rocks! Magazine, conducted an interview with MÖTLEY CRÜE singer Vince Neil at the November 5 VIP party for Vince Neil’s Tatuado Eat-Drink-Party!, described as “the ultimate definition of Neil‘s Tatuado brand and outrageous lifestyle,” in Las Vegas, Nevada. You can now watch the chat below.

Asked about MÖTLEY CRÜE drummer Tommy Lee‘s recent statement that CRÜE guitaristMick Mars‘ ongoing battle with Ankylosing spondylitis, a painful form of chronic arthritis that causes vertebrae in the spine to fuse together, was one of the primary reasons for CRÜE‘s revelation that they will call it quits after 2015, Vince said: “I don’t know why Tommy would say that. It really had nothing to do with Mick‘s health. It was just because we all felt — at least me and Nikki [Sixx, bass] and Mick — felt that it was just we didn’t wanna go out on the bottom. We didn’t wanna be one of those bands that start fading away. We’ve been on top for 32 years, and it’s great. And it’s just like, you know what? By the time we finish this tour, it’ll be in 35 years of MÖTLEY CRÜE. So… that’s really kind of it.”

He added: “After this farewell tour, who’s to say we won’t play again? I could probably see us play way down the road — a concert here or concert there, maybe — but we’re not, like, doing the KISS farewell thing, where they have their fifth farewell tour.”

On the topic of what he plans on doing after MÖTLEY CRÜE is done, Vince said: “I have my own stuff. I have my solo band, and we have a lot of touring coming up. And actually, it looks like me and Sammy Hagar are gonna go out together for a long tour next year. I’ll be carrying the torch for MÖTLEY CRÜE when MÖTLEY CRÜE is done.”

Lee told Canadian progressive-house music producer and performer Deadmau5 in a recent video: “Our guitar player, Mick, he has a spinal disease that’s slowly fusing his vertebrae together. It’s one of those things that’s treatable, but not curable. So it’s just progressively getting really worse and it’s painful for him, so he doesn’t wanna tour much longer. I can’t say I blame him… The last thing we ever wanna do is go out running on two cylinders with some hired guy playing guitar; that’s just wack. So we wanna go out with one big hurrah with the original guys and be done with it.”

He added: “That’s such a bad look when bands are still playing the fucking fairgrounds — those county-fair shows — and it’s just like two of the original guys, or one original guy, and the rest, no one knows who they are. We don’t wanna do that.”

However, in a posting last month on his Twitter account, Mars painted a different picture, claiming that his medical condition had never affected his playing. “Once again, any rumors regarding a farewell tour due to ‘my poor health is BS,” he wrote. “I am doing fine, my AS has never kept me from touring.” He added: “Thank all of you for knowing the truth… When I’m done touring, you’ll hear it from me.”

Lee responded to Mars‘ Twitter posting, writing: “@mrmickmars it’s probably not so much about your physical health it’s more about our mental health as a band! Haha!”

MÖTLEY CRÜE recently returned to Las Vegas for an exclusive twelve-show engagement September 18 through October 6 at The Joint at Hard Rock Hotel & Casino.