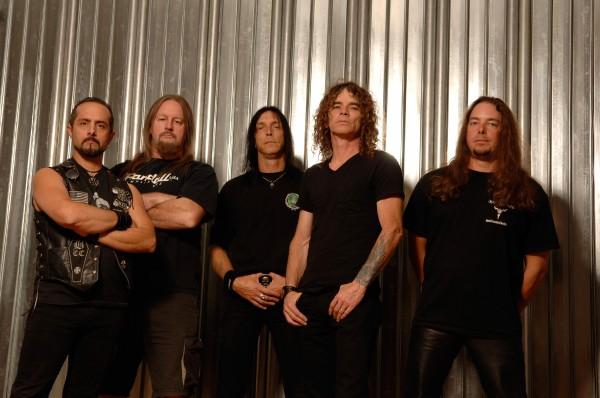 Video footage of OVERKILL‘s November 15 performance at City National Grove Of Anaheim in Anaheim, California as part of the band’s “Legends Of Thrash Tour” with KREATOR can be seen below.

High-quality photos of the concert — courtesy of Stephanie Cabral — are available on Facebook: Overkill, Kreator.

OVERKILL is putting the finishing touches on its new album for March 2014 release in North America via eOne Music and in Europe through Nuclear Blast Records.

Speaking to Steppin’ Out magazine, OVERKILL vocalist Bobby “Blitz” Ellsworth stated about the upcoming CD: “The new record has a blend of what we’ve done over the past half decade. I’m noticing it’s a more punchy heavy metal record with more dimension than the last record had. Where is it going to end up on the food chain? I really don’t know. But my feeling is it’s an eclectic collection of moments from us. ‘The Electric Age’ came across, to me, as kind of a two-dimensional thrash record. This one is punchy but has a whole different bunch of ways to go and things to hear on it.”

As previously reported, OVERKILL released a very special limited tour edition of its latest album, “The Electric Age”, in Europe on April 19 via Nuclear Blast Records. The limited 2CD tour edition includes the regular album as well as a four additional live tracks on a bonus CD, recorded at The Metro in Sidney, Australia on September 25, 2010.