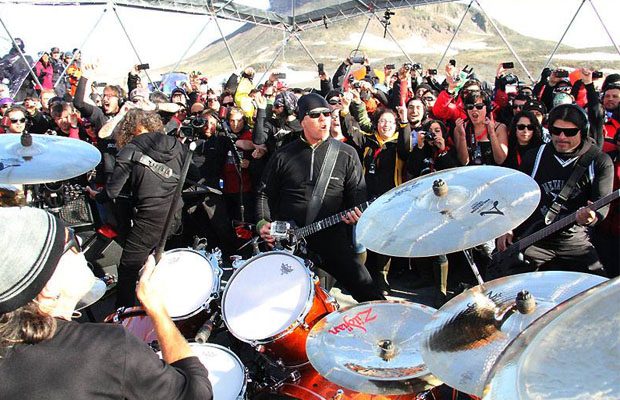 METALLICA successfully performed a 10-song concert in Antarctica on Sunday (December 8), with video from the historic show available below. A statement from the band said, “This was the most unique show METALLICA has ever done. The band, contest winners, research station scientists (from Russia, South Korea, China, Poland, Chile, Brazil and Germany), and the ship crew, all crammed in this little dome out on the helipad of Carlini Station in Antarctica! The energy in the little dome was amazing! Words cannot describe how happy everyone was.”

The METALLICA concert was sponsored by Coca-Cola Zero and fans from several Latin and South American countries had a chance to enter a contest and win the opportunity to join the band on the expedition.

The concert took place under a dome at the Carlini Argentine Base and was heard by the fans through headphones, with no other amplifiers or sound system. The gig was also live-streamed in the participating countries.

METALLICA‘s setlist was as follows:

Professionally filmed video footage of the concert can be seen below.

Speaking to Nikki Blakk of the San Francisco, California radio station 107.7 The Bone last month, METALLICA guitarist Kirk Hammett said: “We are playing Antarctica; it’s pretty wacky. It’s crazy, because I don’t deal with cold very well, so I have my reservations. But it should be pretty cool, because we’ve played the North Pole before — we’ve played Tuktoyaktuk [in 1995]— so we have to play the South Pole. Tuktoyaktuk was fine; it wasn’t as cold as it sounded. But I have a feeling that the Antarctica is a lot colder than the North Pole. And it should be an interesting experience.”