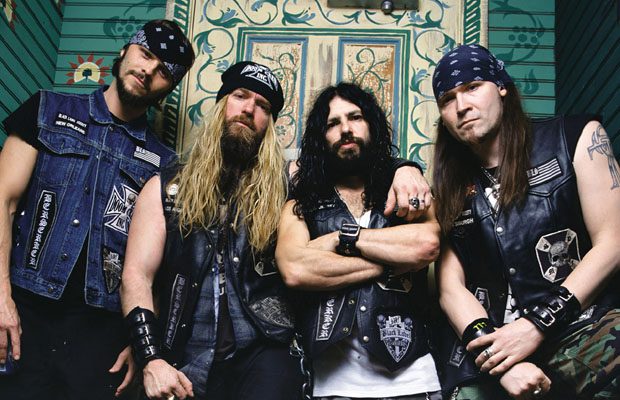 The new BLACK LABEL SOCIETY studio album, “Catacombs Of The Black Vatican”, will be released in Europe on April 7 via Mascot Label Group and one day later in North America through eOne Music.

If you pre-order the CD on iTunes, you will get the new track “My Dying Time” instantly. The song is now available for streaming in the YouTube clip below.

BLACK LABEL SOCIETY mainman Zakk Wylde recently told Guitar World magazine about Catanese‘s departure: “I had called Nick to tell him about the album and he told me that he was already knees deep into doing his own thing and wanted to stick 1,000 percent into it. I told him it was cool and that we loved him and that he’d always have a home here.”

He continued: “The thing is no one ever gets kicked out or fired. If you want to go, you’re always able. Now we’ve got [guitarist] Dario Lorina in the band, and not only is he a kick-ass guitar player who can shred, but he’s also a really cool dude.”

Asked how he hooked up with Dario, Zakk said: “We never do a cattle call or anything like that. With the amount of awesome players I know, it’s more of a word-of-mouth kind of thing. I had him come out to the Vatican [Zakk‘s home studio] to meet him, and afterwards I said, ‘Cool. If you want to do it, you’re in.’ It was as simple as that.”

Wylde also spoke about what fans can expect to hear on “Catacombs Of The Black Vatican”.

“I think everyone can expect a lot of fun and excitement,” he laughed. “It was like what Chris Farley did in that one skit, where he was selling that hair-care product. Make sure you always use the word ‘fun’ when you describe it. [laughs]!

“Someone asked me what the difference was between this new record and the other nine. I told them that it’s basically all of the songs we used on the other nine records, except they’ve got different titles now. [laughs] It’s fun and exciting for the whole family!”

“Catacombs of the Black Vatican” is BLACK LABEL SOCIETY‘s first new studio album since 2009’s “The Order Of The Black”, which debuted at No. 4 on The Billboard 200 chart.