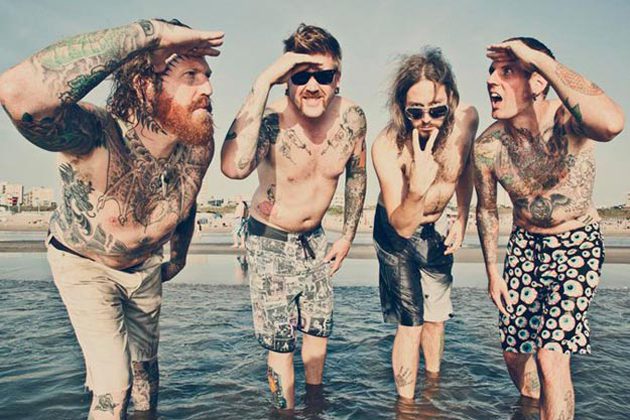 Atlanta progressive metallers MASTODON will embark on a spring headlining tour with support from GOJIRA and KVELERTAK. The trek kicks off April 28 in Seattle and criss-crosses the U.S. before culminating in a performance at the Rock On The Range festival on May 18. Tickets go on sale this Friday, February 7.

MASTODON is putting the finishing touches on its sixth album at a Nashville studio with producer Nick Raskulinecz (FOO FIGHTERS, RUSH, ALICE IN CHAINS).

Speaking to ARTISTdirect.com, MASTODON singer and bassist Troy Sanders was asked if the band’s new material picks up where “The Hunter” left off or if the group is “on a whole new trip.” “I think, to a degree, it picks up where we left off,” he said.

“As always, nothing was really pre-determined and spoken of beforehand, like, ‘Okay guys, we need to write a lot of long epic songs and a lot of short sweet songs. We need to have a couple of slow ones.’ Nothing like that was predetermined verbally amongst the four of us. We go in there and we kind of pick up on whatever comes through Brent [Hinds] and Bill‘s [Kelliher] fingers and their guitars and build and build.

“I guess it’s going to be more of a continuation of where we left off with ‘The Hunter’. Hopefully, it’s just a collection of good MASTODON rock ‘n’ roll songs. That’s where it’s headed.”

Asked what it’s been like working with Raskulinecz on the new album, Kelliher told Metal Hammer magazine: “It’s something that we totally need — a cheerleader to get our asses in gear. There he is saying, ‘Come on, you’re MASTODON… you’re one of the biggest bands in metal… Smash that hammer down and write some heavy shit. It’s time to do or die!’ He’s that kind of a guy.”