THERION: ‘Wisdom And The Cage’ Performance Clip From ‘Adulruna Redivia And Beyond’ 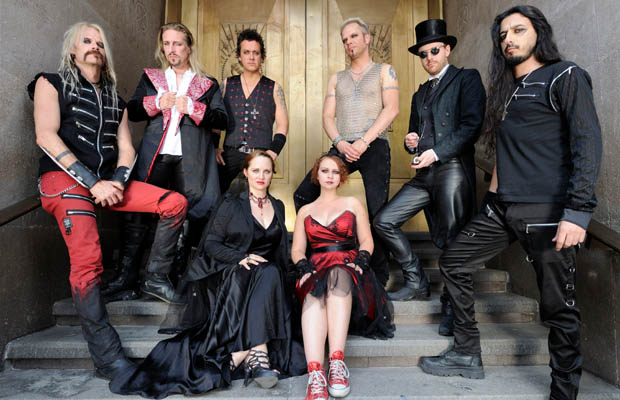 On February 28, a THERION three-DVD package (limited edition including bonus DVD) called “Adulruna Redivia And Beyond” will be made available. The package will include two shows that were recorded live in Atlanta in 2011 and in Budapest 2007 as well as bonus material.

Commented the band: “The concert recorded in Hungary was a concert on the ‘Adulruna Rediviva’ 20th anniversary tour in December. The idea of the tour was to play the entire ‘Theli’ album plus a set consisting of songs that the fans had voted for on the band web page. Piotr Wawrzeniuk and our old friend Messiah Marcolin joined in to make this evening extra special. The concert in Atlanta was the band’s only show in the USA since 2007 and was shot during the band’s headline performance at the ProgPower USA festival 2011.”

Adds THERION: “011 is the name of a board game made by the italian game manufacturer Scribabs. In a very ambitious way to market the game, they made this fantastic short film, starring the band members as actors, playing their roles in the game. The main man behind the game and the film, Paolo Vallerga, is currently writing a novel on the story behind the game and there are even some plans for a movie.”

“‘Amazing Voice’ is a Japanese TV program about great singers. This episode had Thomas Vikström as main focus and the TV team flew to Sweden to interview Thomas and record some live singing exclusively for the program.”

Check out the “Wisdom And The Cage” performance clip from “Adulruna Redivia And Beyond” below.

A new THERION studio album is scheduled for late 2014.