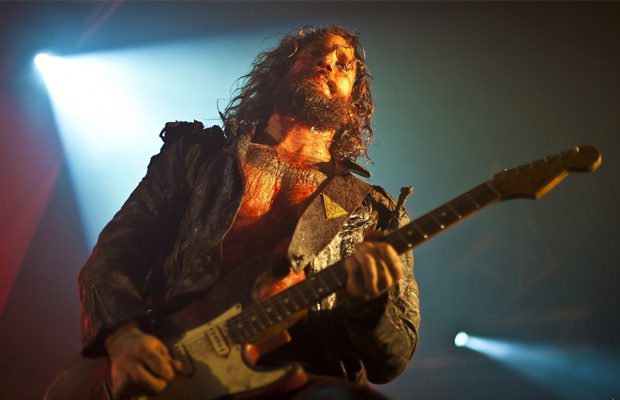 According to the web site of 3VOOR12 (a multimedia platform of the Netherlands Public Broadcasting VPRO for alternative pop), Selim Lemouchi, former frontman of the Dutch occult rock act THE DEVIL’S BLOOD, has died at he age of 34. That news was confirmed by Bidi van Drongelen, the band’s longtime manager and booking agent, as well as Walter Hoeijmakers, Roadburn Festival founder and organizer. No further details are currently available.

THE DEVIL’S BLOOD called it quits in early 2013. The band’s final release, “III: Tabula Rasa Or Death And The Seven Pillars”, a collection of unfinished demos recorded at Lemouchi‘s home studio, was made available last June.

THE DEVIL’S BLOOD‘s latest full-length album, “The Thousandfold Epicentre”, came out in North America on January 17, 2012. The 11-song CD was produced with the help of Pieter Kloos at Void Studios in Eindhoven, The Netherlands.

Originally released in Europe in November 2011 through VÁN Records, “The Thousandfold Epicentre” landed on the Dutch album chart at position No. 76.

In a 2013 interview with MetalSucks, Selim stated about THE DEVIL’S BLOOD‘s decision to disband: “It was a bit of a shock to us as well, because we found ourselves incapable of continuing. And, of course, that generated a little bit of frustration, and even some in-fighting… We felt, both of us — me and my sister as well — that we had done so much from this point of view, if you want, from this certain aesthetic, from this… well, not dogma, but in a certain way we had this very clear plan of how everything could be done and how it should stand, and nothing was left to [pauses] chance. We looked back and we were, like, Yeah, there’s nothing really to say anymore. We’ve said it all, we’ve done it all. Especially when we looked at the last record, at the demos, we were, like, Wow. This is the third record. There’s never going to be a fourth record. You feel that. You know that. You know it when you’re done. Like a painter watching a painting: You can touch it up, you can step away from it for a while, you can go back and add a few colors or something — but there’s a point where you look at it and say, okay now it’s done. Now I have to stop messing with it because I’m going to ruin it. And I think a problem with most rock ‘n’ roll bands is they overstay their welcome by a long shot.”

He continued: “I’ve never wanted to be a band that overstays its potential. Y’know? I always think that THE ROLLING STONES is a good example. After ‘Some Girls’, who needs another STONES record? THE BEATLES … That’s exactly how you should end a career: right then and there at the high point of creativity. At the high point of having something to say. ‘Well, we’ll never be able to do this again. Goodbye.’ That’s just honesty. That’s what an artist should always stand for.”

A 2011 mini-documentary from FaceCulture in which Selim talked about taking control over his own life, struggling with drugs, alcohol and depression, writing music and painting, and the important role death played in his life can be seen below.