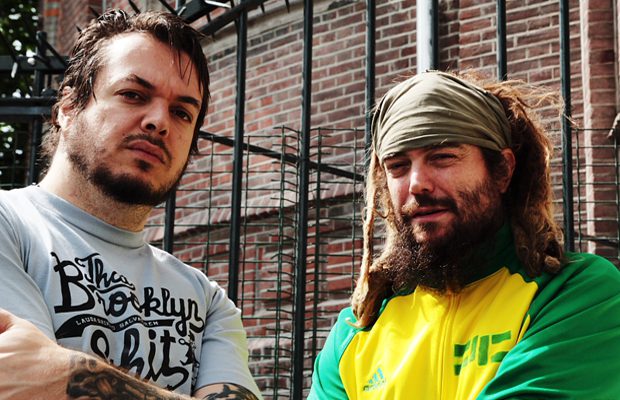 CAVALERA CONSPIRACY, the band led by brothers and founding SEPULTURA members Max (also of SOULFLY) and Igor Cavalera, is putting the finishing touches on its third album for a fall release via Napalm Records. The CD is being produced by John Gray, who has previously worked with SOULFLY.

Max Cavalera checked in from the studio to give an update.

On working with his brother:

Max: “It has always been some kind of killer magic whenever I play with my brother. We have a special connection that comes out through the music and the crowd reacts to it in an insane way.”

On the recording process:

Max: “Pretty much, I have to get into CAVALERA CONSPIRACY mode. I wanted the new album to be faster and thrashier with the concept of Old Babylon. As far as recording equipment, we use everything! We don’t rely too much on Pro Tools like other bands. All Igor‘s tracks are live drums. The energy is all there and we play all the guitars and sing of top of it, so in a way, it’s like the old ways of recording.”

On feelings of pressure regarding the band’s third album:

Max: “There’s pressure but I also like the challenge. I think it is the CAVALERA CONSPIRACY‘s most and intense and fastest record yet. I am very proud of it.”

Said Gray: “This is by far the fastest and heaviest record I have ever had the pleasure of working on with Max Cavalera.

“Max, Igor and Marc [Rizzo, guitar] were on the same page musically from the moment they walked in the door, and recording this album was a very smooth process.

“I had never worked with Igor Cavalera before and I was very impressed with his ability to work out the arrangements with Max and get some extremely complex drum parts done live with hardly any re-takes necessary. Marc Rizzo, as always, was spot-on and a true guitar virtuoso.

“I love to work with Marc because he always pushes himself to perfection, but he is very down to earth and keeps things light when he’s under pressure.

“What can I say about Nate Newton — he killed it on the bass tracks with very little back and forth. I’m really impressed with his talent, and I look forward to meeting him some day.”

Stated Newton: “It was a lot of fun to be a part of this record. For me, it was a challenge to learn the songs sight unseen and record them. It was a pretty interesting look into the way Max writes songs and I am glad to have been a part of it.”

Johny Chow, who had been touring and recording with CAVALERA CONSPIRACY for the past few years, in 2013 joined STONE SOUR as that band’s new touring bassist.