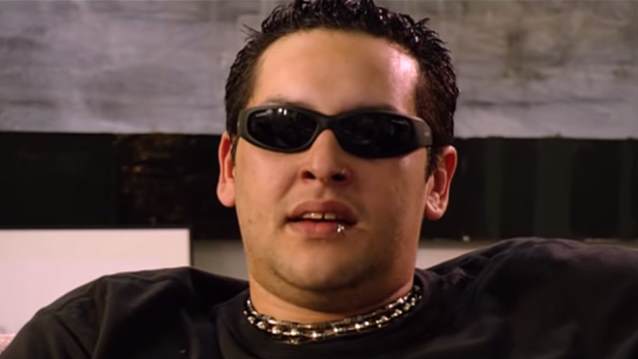 According to DesMoinesRegister.com, the doctor who treated Paul Gray (pictured) in the days before the SLIPKNOT bassist’s 2010 death was acquitted of seven counts of involuntary manslaughter.

Daniel Baldi was accused of causing the deaths of Gray and eight others with his careless prescription habits.

Jurors deliberated for two days before decided in favor of Daniel Baldi, whose lawyer contended that none of the patients in question died from overdoses of drugs the doctor prescribed.

Baldi still faces several civil lawsuits as well as administrative charges from the Iowa Board of Medicine which could cost him his medical license.

Paul‘s widow, Brenna Gray, testified on April 22 in Baldi‘s trial and said that Paul‘s final weeks were a “blur of extreme drug abuse,” which neither his doctor nor his bandmates would help his wife confront.

Brenna testified on the stand that Baldi continued to prescribe Xanax for Paul despite knowing that the musician was a drug addict, saying, “I just wasn’t really sure why he was on it, why he needed it along with the medication he was taking for addiction.”

Baldi‘s lawyer cross-examined Brenna, asking her if she was aware that her husband overdosed on the painkillers fentanyl and morphine, neither of which Baldi ever prescribed to him.

Brenna also testified that she tried reaching out to some of Paul‘s bandmates in SLIPKNOT just days prior to the bassist’s death but that none of them wanted to get involved. She revealed, “One was playing golf two minutes away from our house but couldn’t come. Nobody else cared, nobody was involved. They told me it was my problem.”

SLIPKNOT singer Corey Taylor told The Pulse Of Radio back at the one-year anniversary of Gray‘s death how he felt about the loss of his friend and bandmate. “I just miss him, you know,” he said. “I miss him so much sometimes that it doesn’t feel like he’s gone, and there are times when I’m thinking and he’s in my train of thought and I have to stop myself and go, ‘Oh, God, he’s not here.’ But you know, I mean, there’s not a day that goes by that I don’t miss him. I mean, not even as far as the band goes — I wish that he was there to watch his daughter grow.”

Brenna revealed in a 2011 interview with Revolver that her husband had agreed to get help for his drug problem just one day before he died on May 24, 2010.

Paul was found dead in a hotel room in a suburb of Des Moines, Iowa, where he and SLIPKNOT were based. He was 38 years old. He left behind his widow and a daughter, October, who was born three months after his death.

After a lengthy hiatus, SLIPKNOT resumed touring in 2011, with Donnie Steele playing bass live. The band recently entered a studio to begin recording its first album without Gray.