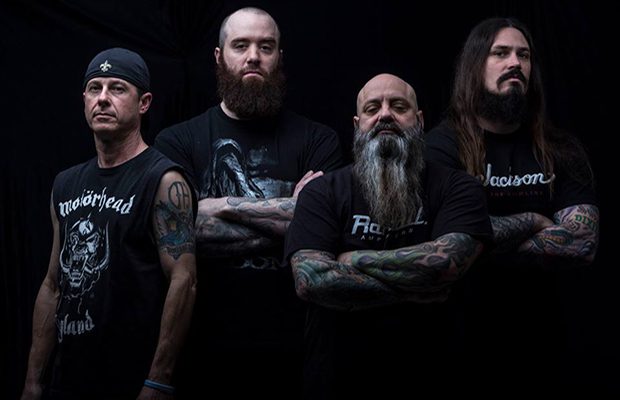 “Walk With Knowledge Wisely”, the new video from New Orleans sludge metal veterans CROWBAR, can be seen below. Directed by Mike Holderbeast (DOWN, EYEHATEGOD), this is the first of two clip fans can expect to see from the band’s new album, “Symmetry In Black”, which came out this week.

“For this video, we decided to let the music do the talking,” said CROWBAR guitarist/vocalist Kirk Windstein,

“Working with Mike was a breeze and a pleasure. He has filmed many of our live shows and he is a true professional.”

Windstein added about the track: “‘Walk With Knowledge Wisely’ is the perfect opener for ‘Symmetry In Black’. It has every element of the CROWBAR sound and is like an anvil to the face. It’s CROWBAR at its finest.”

“Symmetry In Black” came out in North America on May 27 via Entertainment One Music. The CD, which was made available in Europe on May 26 through Century Media Records, was produced by CROWBAR guitarist/vocalist Kirk Windstein and Duane Simoneaux and was mixed by Josh Wilbur (LAMB OF GOD, GOJIRA).

The release of “Symmetry In Black” coincides with the 25th anniversary of the CROWBAR‘s inception. Windstein said: “CROWBAR is my heart and soul. The music is a part of me that I am extremely proud of.

“We are extremely excited to release our 10th full length and to bring the riffs to as many people as possible on tour.”