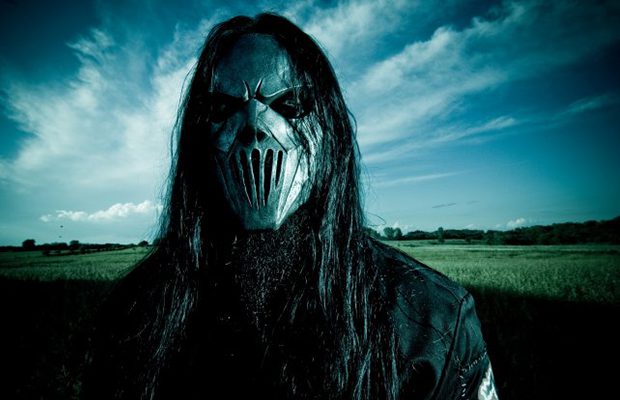 In a brand new interview with “Loudwire Nights” host Full Metal Jackie, SLIPKNOT frontman Corey Taylor was asked if the band has been brainstorming about creating the right onstage persona for its new drummer prior to the release of SLIPKNOT‘s fifth studio album, “.5: The Gray Chapter”, which arrives on October 21.

“We wanted to make something that still looked unified but still stayed with the spirit of what the band is all about,” Corey replied. “Instead of trying to find something that was individualistic, we designed — well, [percussionist] Clown designed a mask that the drummer and the bass player will both wear. On one hand, they get a mask, but at the same time, it’s not the individual mask that we in the band use. We knew that any attempt to do anything like that might be taken as disrespectful, but at the same time it’s part of the way of moving, getting past the hardest steps, which is just moving on. So, we decided that we would come up with a mask that works for both the bassist and the drummer and that’s what they’ll wear on stage.”

The first official single from “.5: The Gray Chapter”, called “The Devil In I”, has just entered the Top 20 at rock radio.

The album is the first without bassist Paul Gray, who died in May 2010, and drummer Joey Jordison, who was dismissed in 2013.

The identity of SLIPKNOT‘s new drummer is still a secret, although it is widely believed to be Jay Weinberg, son of longtime Bruce Springsteen drummer Max Weinberg.

It is also rumored that SLIPKNOT is no longer working with Donnie Steele, the group’s original guitar player who has been playing bass since they resumed touring in 2011.

A new video teaser for SLIPKNOT‘s upcoming “Prepare For Hell” tour has given us a glimpse of Taylor‘s new mask. The band traditionally unveils brand new variations on its trademark masks and onstage outfits for every touring cycle, with the masks for 2008’s “All Hope Is Gone” tour — the last time the group came out with new gear — much different from previous versions.

Taylor told The Pulse Of Radio that he’s relieved the long wait for a new SLIPKNOT record is about to end. “You know, we’re really excited about new music,” he said. “We’re excited about the next chapter, you know. Obviously it’s a bit subdued, but at the same time, you know, it’s still very much in the spirit of what we want and it’s time for the next chapter.”

Tickets for the “Prepare For Hell” tour, which will also feature KORN and KING 810, went on sale Friday (September 5). The trek kicks off on October 29 in El Paso, Texas, just a few days after the group’s two-day Knotfest event is held in San Bernardino, California.

SLIPKNOT announced in December 2013 that it had parted ways with Jordison. The band has not disclosed the reasons for Jordison‘s exit, although the drummer issued a statement in January saying that he did not quit the group.