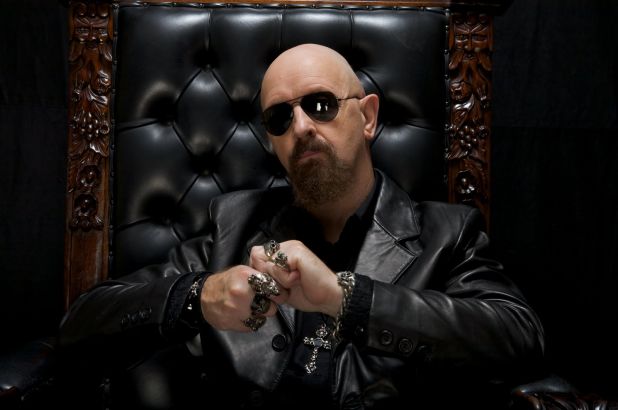 JUDAS PRIEST singer Rob Halford who revealed earlier in the year that he was suffering from umbilical hernia, a condition where the belly button pops outwards due to a weakness in the muscles in or around the belly button, tells The Morning Call in a brand new interview that his health is good.

“Yeah, I’m not bad,” he says with a laugh. “I mean, creaking out of bed at 63 is not as easy as leaping out of bed at 16. But I love it. I love getting old, I really do. I just think that I embrace it because I’m a lucky guy. What a joy — a man of my generation being able to do this sort of thing. It’s just remarkable.

“I’ve had a few health hiccups the last few years, but nothing as dramatic as some people go through in life and I’m grateful that I can still get up and do my work. I do it ’cause they keep coming back. I’m more like the Perry Como of heavy metal,” he says, laughing again.

“No! Strike that. I’ll use a living person: I’m the Tony Bennett of heavy metal. There you go — use that. Which means I kind of glide across the stage these days.”

Halford was last year seen hobbling around with the aid of a walking stick. He told RollingStone.com at the time: “I’ve got a bit of a back issue, which is fixable. Thank the lord it’s not happening while we’re touring, because we’d be in a terrible state.

“But apart from that, everything is working fine. My voice… is wailing. It’s strong, it’s powerful… I’m 99.999 per cent working.”

Recalling a meeting with his longtime friends Lemmy and Rob Trujillo at the 2013 edition of the Revolver Golden Gods awards in Los Angeles, Halford said: “I’m in the dressing room… and Lemmy‘s sitting across from me. Lemmy, God bless him, is going through heart difficulties. I’m comparing my ailments with Lemmy, and Rob, the bass player from METALLICA, is doing these stretches… I don’t know, these guys, a guitar is 15 pounds, and when you’ve got that slung around your neck for two and a half hours a day — I think it’s just degenerative. It’s accumulative injuries.

“There’s no difference from some aspects of sports. You think of a golf player just hitting a ball — ‘Well, that can’t be too strenuous.’ But it is. It’s incredibly strenuous when you do that for 40 years. You’re going to have a few nicks and bruises.”