German police have called for an evacuation of the popular Rock Am Ring festival in Nürburg over a “terrorist threat.”

More than 80,000 fans are attending the three-day event, which was scheduled to run until Sunday.

The organizers said in a statement: “Due to a terrorist threat, the police have advised us to interrupt the festival.

“We ask all festival visitors to leave the festival site in a calm and controlled manner towards the exits and camping grounds.

“We have to support the police investigations.

“All visitors will be kept informed about any developments on all Rock Am Ring social media channels, radio and the speakers.

“We hope that the festival will continue tomorrow. Thank you for your cooperation.”

The police said the event had been suspended due to “concrete leads, which do not allow us to eliminate a possible terror threat”.

They added: “We are currently conducting a very intense investigation.”

Of particular concern is a person who had been involved in the festival preparations, including erecting the security fences, according to Sky News.

The organizers announced last month that backpacks would be prohibited at this year’s Rock Am Ring and Rock Im Park following the “horrendous attack in Manchester.”

As was the case with last year’s Wacken Open Air, the German sister festivals are rucksack-free zones this summer, with keys, wallets, mobile phones and bum bags/fanny packs the only personal items allowed into the main festival arena.

Marek Lieberberg paid tribute to those who lost their lives in Manchester, calling the bombing of Manchester Arena “an attack on our freedom, culture and [way of] life.”

This headliners of this year’s Rock Am Ring festival include RAMMSTEIN and SYSTEM OF A DOWN. 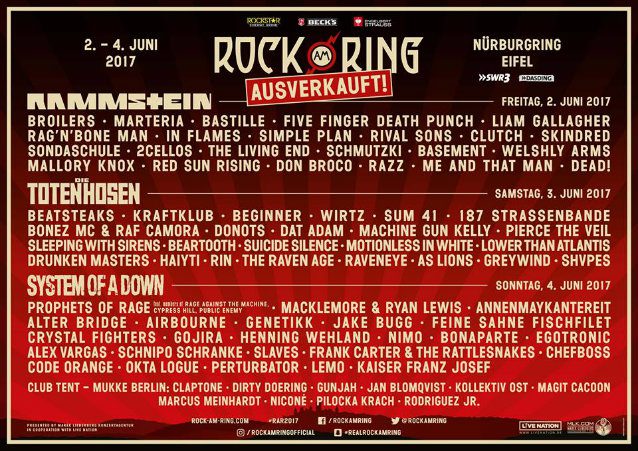