It isn’t the first time that Hard Times promotion, in association with Texas Necropolis club surprise us due to the booking of a show we would never imagine to be able to enjoy in our country, as it happened on the 8th of February 2009 (yes we haven’t realized yet that we are finally a bit unstuck from shows like the whole archive of the New Wave Of British Heavy Metal!!).

War From A Harlots Mouth, the hardcore/grindcore group from Germany arrives for the first time in Greece and together with the three Greek supporting acts and a warm audience, no matter if they counted quite few in number, are here to prove that music is what it’s all about.

First band on stage and with a little bit of delay was Perfect Murdership who are a mixture of some experimental elements along with a hardcore basic tune. Well I have to admit that the band has a great 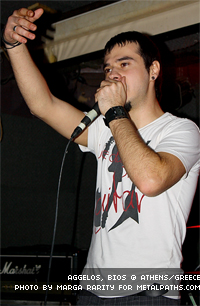 potential and one hell of a harsh vocalist, but I believe that they still have some margins of improvement in order this Murdership gets totally “perfect”, as what I’ve heard didn’t offer much things further than what we’ve already listened from many bands in the past. As they have set themselves in the “experimental” category, they could experience much more stuff by practicing and set their own spot in their music as well. However their stage set was pretty cool and the Slipknot cover “People = Shit” enough to keep the fans in a warm mood for the rest of the show.

Next band was Bios from Kilkis with their second visit in Athens, who started their performance with the song “Impulse Come Out” from their debut album “You label my essence”.

At the beginning I was unable to build my instant conclusions about the band’s appearance, since the sound was not pretty clear and I could barely listen something else apart from the drum and bass’ rhythm, but the sound engineer immediately fixed this problem and from the second track and on we were left with no doubt that this band worked a lot for this result and deserves to pay our attention to them. They offered a great show with their energetic non stop headbanging, playing 6 songs from their full-length release and a cover to the Ramones’ masterpiece “Blitzkrieg Bop”.

It’s time for The News Called You Dead to get on stage, a band which I was really looking forward to check live and that’s because every sample of their work that I have listened before that day was really a piece of some great compositions and immanent talent.

TNCYD fulfilled my expectations by being a band that shows to have an intense musicianship, strong image and straight advised metalcore attitude, which you could easily compare with our favorite artists of the genre. I am sure that if the band continues on the same motif they will soon gain a worthy record deal.

And finally this is the part where War From A Harlots Mouth are getting on stage and there was not much time needed for us to realize the experience this band has gained throughout touring. The lineup was relaxed and cool and their professional appearance was the reason the fans started the endless headbanging, even if there were some of them who had barely heard about WFAHM before (and how could they when clubs and promoters don’t help this music to be more popular in Greece). 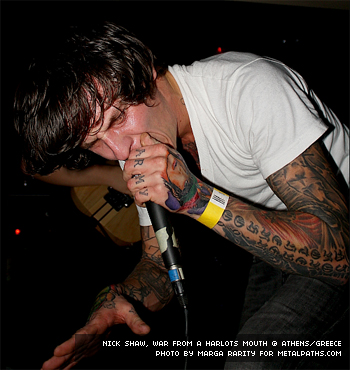 Fortunately this gig automatically meant a good chance for the band to be more well-known in our area and many fans will definitely check the band’s releases and especially the new album titled “In Shoals” which is going to be released in about a month from Lifeforce Records. Need more? Visit our reviews section to get a bit taste of their upcoming release.