Freshly sandwiched from Walls Of Jericho gig all of us psychos were at Texas Necropolis the next day to get more of that solid smackdown, this time delivered by Florida’s progressive post-hardcore legends Poison The Well. They’ve been in the business for a long while, creating outstanding music full of originality (Guitar World magazine still dubs “The Opposite of December” one of the greatest hardcore albums of all-time, ranking number 8), so we’ve been pretty much stocked on seeing them. And we weren’t disappointed at all.

Athens five-piece The News Called You Dead took the stage first. Well what can be said about those experimental-chaotic hardcore lads? Undoubtedly, they’re one band to keep an eye on. Boys are killing it every time, no matter where they’re playing or how big or small the gig or the crowd is, the result is always the same –mega powerful performance includes crawling, lying, jumping, kicking, hanging on basically everything (kinda reminds me of The Chariot’s Josh Scogin) screaming and of course a bunch of heart stabbing & mind blowing songs. This time the embracing sonic storm was created by oldie “Fear Me Son” and 3 new tunes “A Gentleman Always Carries A Gun”, “Cutthroat Manifesto” and “Under Scarlet Skies” and it all ended up with band members ruthlessly throwing and chucking their instruments and rolling on the floor. Massive. 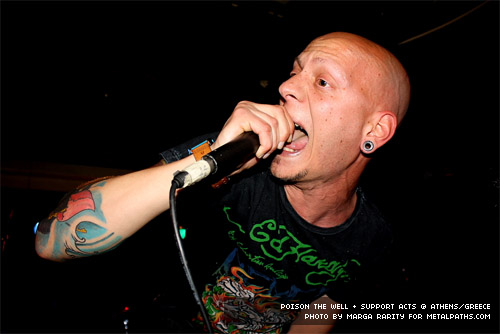 The audience was clearly excited when Dear Darkstar came up, partly because of what they just experienced and partly because of the fact that these guys have been out of sight since last April (Parkway Drive show) and it was quite interesting to find out what they had to show now. Feeling absolutely comfortable on stage this metalcore quartet simply did one thing – it rocked. And they indeed did it exceedingly well. Tracks like ”The Prestige” were thrown from the speakers with genuine force, pleasing our ears with some spicy rock details and the satisfying dose of original sound. Vocalist Costas was clearly having fun – along with all band members- hanging on the ceiling and licking his mic once or two he closed up the set with Motörhead’s cover of “Ace Of Spades”. Maaan that was sooo good.

Did you ever get the feeling that your head was banged against the wall for about an hour resulting a complete loss of understanding what the hell is going on on one hand, but being absolutely enthralled on the other? Well that is approximately how I felt after The Voldera Cult’s performance. They can be fairly characterized as one of the most experienced bands in here – their demo came out back in 2006 (knows as Studiowaste then), followed by promo CD in 2007. Unmistakably, they know exactly what they’re doing and how to do it right. Astonishingly energetic and confusingly yet refreshingly chaotic songs “Pariah”, “The Visitor”, “Lips On Fire” were bursting out one by one like a non-stop kicking in the mug reinforced by band’s playing with nothing less but a ravenous relish and complete self-feedback. The audience loved them, yet could it not? I don’t think so.

People crushing towards the front to jostle for position is a good sign of the storm to come. And once first notes of “Botchla” (from “Tear From The Red”, 2002) pierced the hot sweat-smelly air it was hard not to feel like you’ve been volunteered as a crash test dummy. Those at the front row sweeping hands, hanging on the fence and the ceiling, grabbing band members, banging their heads and yelling as if it was a matter of life and death being totally overwhelmed by the overdrive of excitement; those in the back leaping and kicking in the pit looking pretty much like some badass rioters. 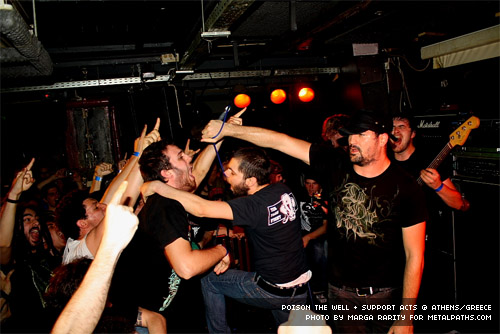 The headliners didn’t even try to resist the madness, instead they dived in it along with the crowd – hopping around, leaning against the wall, clambering here and there, pummeling the shit out of the instruments (and us, too) and throwing out songs with pitiless throat-catching hooks deft combined with smooth chords and sometimes delicate yet powerful choruses.

14-tracks-set was mostly based on previous albums : “Nerdy”, “My Mirror No Longer Reflects” from “The Opposite Of December” (1999), “Meeting Again For The First Time”, “Zombies Are Good For Your Health”, “Crystal Lake” from “You Come Before You” (2003), plus “Letter Thing” and “Prematurito El Baby” that represented their latest to date “Versions” of 2007. As the riffs continue to roll in along with some fans popping out the audience on the stage, the night ends with an excellent tune – “Artist’s Rendering Of Me” : the pulse of excitement reaches its top point and band’s massive impact full of effortless charisma and astonishing energy leaves us with “another day here, another memory dies” sing-along and a sensation of absolute saturation by this truly fantastic show. One hell of a sick night indeed.