It had been long since we last saw here in Thessaloniki the almighty kings of Gothic Metal. From their last time here, they have two new albums released-“In requiem” and “Faith Divides Us”- and a big disappointing cancellation of their previous show during the “In Requiem Tour” due to health problems Nick Holmes faced that day.

Two good reasons to get Principal Club theater crowded and actually prove that, whatever Paradise Lost do, they are greatly loved in our country.

The show started with a Poem‘s appearance on stage. A progressive experimental quartet from Athens, Greece that is doing really great lately. Having a new record release to promote (The Great Secret Show), Poem grabbed the stage and introduced themselves at the audience, with a high quality performance. Really great playing, energetic stage appearance and nice song structures. Difficult, as their music is -at least for the average Paradise Lost concert audiences- they kept the crowd’s interest throughout their entire setlist, including an eleven minute song.Really great band and I think there’s a lot to wait from them in the future. 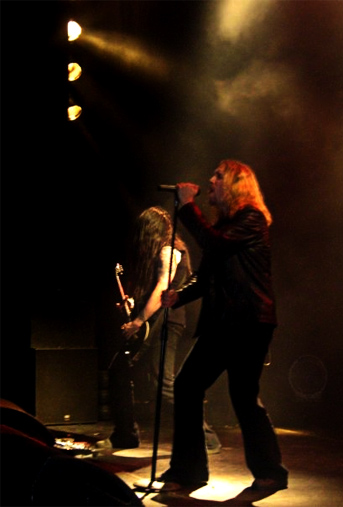 Back to the main event of the night though, the appearance of Paradise Lost on stage, was somehow delayed by the change of the stage and the last sound checks. Around 22:50 the lights go down. Big screams and the intro of this tour is out on the speakers. The five man dressed in black, are on their sits and “Rise Of denial” from latest release opens the set. Some sound problems of small importance cannot change the smile on everyone’s face.

Paradise Lost are not kidding! They’re back into Metal in its all. Energetic, they seem to enjoy ever second. Greg, in his corner, hitting the 7-string melodies. On the opposite side, Aaron, bringing the heavy riffs to our ears.Steven Edmondson keeping the great wall of low frequencies in accordance with new drummer/member Mr Erlandsson. And finally Nick Holmes spitting out the refrains and couplets of our nightmares. Everyone sings along every lyric and shouts out every refrain from every song that follows.A nice experience, we hadn’t seen for long time with this band.

The set goes on with “Pity the Sadness”, “Erased” and the first big song of the past appears with the intro theme. “Embers Fire” brings the crowd into delirium and that’s a word quite proper to describe what went on. Another nice new tune “I Remain” came next to give space for the concert must “As I Die” where the crowd seems to be louder than Nick’s voice and also the same went on for “The Enemy” that followed. “First Light” slows down the tempo and the mood is quite dark enough for the song that starts with the sweet piano. “Enchantmet” from Draconian Time breaks through and the crowd becomes once more the helping choir. Two mid tempo songs were enough so new track “Frailty” with its fast rhythm takes over to start the headbanging everywhere once more. And then another high time from the past follows.”One Second” brinds down the mood once again and after it’s finished, Charles Manson is on the speakers. 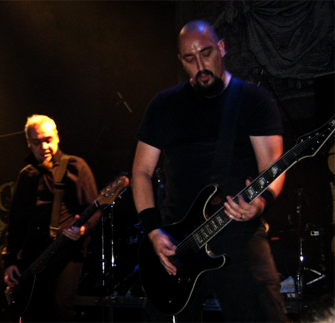 “Forever Failure” really is the biggest highlight of the night, for two reasons. One is the participation of the audience, and second is the voice sample problems, that happened in the middle of the song, destroying the mood for some seconds. Also, another problem, concerning drum stands’ problems followed to give an extra big break.

Classic Paradise Lost closer song “The Last Time” starts and brings big smiles once again and after its finished Paradise Lost leave the stage for a while to come back with “Faith Divides us…” that would be the last from the new album.

A small break and the past is back once more… “Eternal”! The crowd is stunned. Many years have passed since this song has been performed live in front of the audience of Thessaloniki and It’s fully welcome. With the final song “Say Just Words” the ultimate sing along track of their carrier Paradise Lost leave the stage for real. A nice setlist, combining latest and oldies in a proper amount of each.

Although, I believe it was somehow not enough for what the world was expecting in terms of performance and duration. Still a quite entertaining evening of sing along and sweat. Hoping next time we get our Paradise Lost more than we expect.